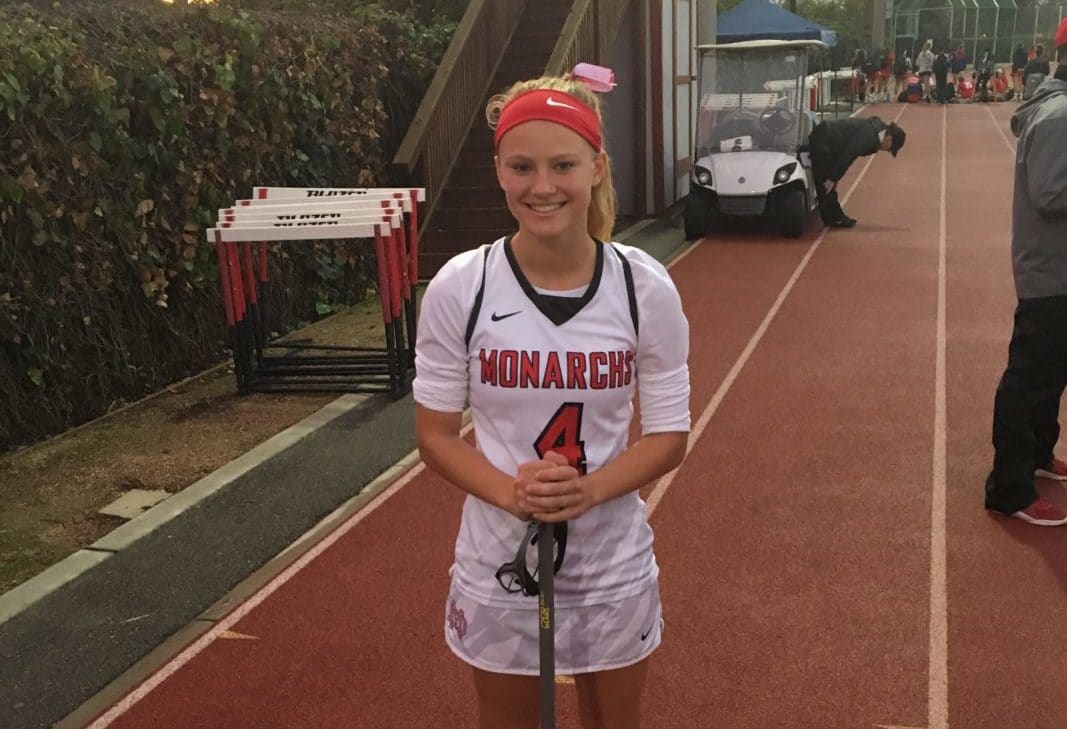 Santa Ana – It was business as usual for Mater Dei’s girls’ lacrosse team, as the Monarchs beat Los Alamitos 12-5 on Tuesday at Mater Dei High School.

Junior Peyton Smith, led the Monarchs offense and made a big push for a second consecutive Player of the Week honor with five goals.

“Our offense really started to play with a little bit more patience and started to play more as a collective group, so I think that was something that changed the momentum of the game,” Mater Dei coach Cressita Bowman said.

Los Alamitos has quietly been moving up the polls with quality wins over higher ranked teams like Trabuco Hills and Corona del Mar.  They rolled into Santa Ana hoping to continue that trend by not only beating Mater Dei for the first time since 2015 but also becoming the first Orange County team to beat Mater Dei since 2015.

Riley Deutsch added fuel to those hopes when she put the Griffins on the board first at about the five-minute mark.  However, Mater Dei responded in typical Monarchs fashion, striking back quickly with two straight goals, causing Los Alamitos coach Sophia Aragon to call a timeout.

The timeout helped, as the Griffins scored off of a free position shot to knot the game up at 2-2.  The momentum shift turned out to be only temporary as the Monarchs closed out the half with a run that gave them a 6-3 halftime lead.

Unable to solve Mater Dei’s draw-control advantage and stifling defense, Los Al was never able to really threaten the Monarchs for the rest of the game.

For Los Alamitos, Lauren Friedman and Naomi Laurain each had two goals while Deutsch had one. Senior goalie Hannah Hornung made 12 saves for the Griffins, drawing praise from Aragon and Bowman.

“I’ve never seen a goalie at Los Al play like her [Hornung] or have this many saves. She’s definitely making her name known and hopefully remember after she leaves,” Aragon said.