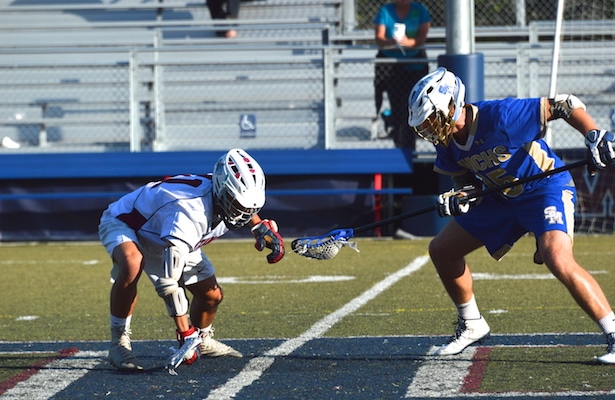 Perhaps by watching March Madness before the game,  No. 4 St. Margaret’s Episcopal School and No. 5 Santa Margarita Catholic High School treated the fans to a game that went down to the wire with playoff like intensity.  In a tale of two halves,  the Tartans dominated the first half, building up a 5-0 lead, and then hung on to earn the W by a margin of 8-7.  This game was not decided until defenseman John Connelly’s takeaway in the final seconds dashed the Eagles’ hopes for completing the comeback.

The Tartans built up their first half lead on two goals by Sam Harnisch and one apiece from Erik Suh, freshman Conrad Hampson, and James Eidt.  Paddy Fallon’s two assists and Nick Kuljuis’ one assist also factored in the first half scoring.  While the Tartans’s offense was  controlling one end of the field in the first half with ball movement and unselfish play, their defense was stifling the Eagles on the other end.

The momentum began to shift almost immediately in the third quarter with Andrew Kofoed (Notre Dame de Namur) putting the Eagles on the board in the opening seconds.  In a reversal of the first half, it was now the Eagles’offense that was controlling the pace of the game while their defense went into lockdown mode.  The Eagles outscored the Tartans 7-3 in the second half,  and got as close as 8-7.  They had their chance to tie the game with possession in the final minute, but Connolly’s steal saved the day for the Tartans.   Nico Houser’s  (Wagner) second half hat trick led the Eagles. Kofoed, Zach Taylor, and Logan Dochterman all finished with 1 goal and 1 assist.  Shane Cobb  scored one goal for Santa Margarita and Jack Fisher had an assist.  Harnisch completed his hat trick in the second half to go along with goals from Fallon and Kuljuis.

Payton Fales had 14 saves for the Tartans and Ryan Harnisch was his usual dominant self on faceoffs.

Eric Rubak was Mr. Everything for the Eagles, winning four faceoffs, causing two turnovers, getting credit for four clears, and recovering two gbs.  His ability to slowdown Harnisch on the faceoffs was crucial to Santa Margarita’s second half efforts.   Max Vought was solid between the pipes with 11 saves.