SMCHS Drops Second in a Row, 11-4 at Palos Verdes 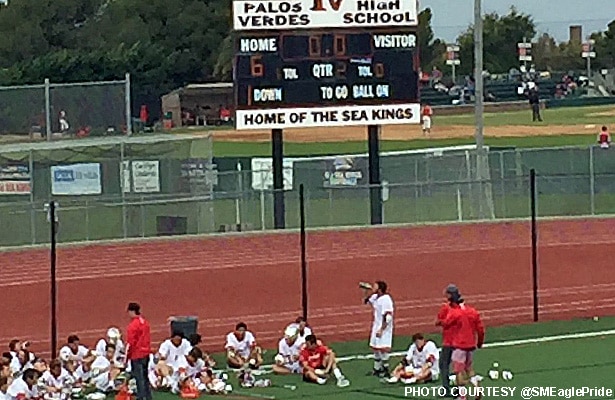 Visiting Santa Margarita, which opened the season 4-0, lost its second game in a row Saturday, falling 11-4 to Palos Verdes, ranked No. 4 in the Los Angeles-area coaches poll.

SMCHS was ranked No. 4 in the OC in the preseason and opened the season with four consecutive wins. Saturday was the Eagles’ second loss in a row, following Tuesday’s 16-5 loss to St. Margaret’s.

Palos Verdes, which was voted No. 1 in the preseason coaches poll, lost twice to open the season — 9-8 to Westlake and 10-6 to St. Margaret’s — and dropped to No. 4. The Sea Kings since have won twice over strong competition and might be starting to click.

Saturday, the Sea Kings scored first, built a 6-1 halftime lead and were never really threatened from there. SMCHS’ Logan Dochterman scored to tie the score 1-1 early in the second period, but Palos Verdes went on a 5-0 run to take a comfortable lead into halftime. The lead grew to 8-1 before the Eagles scored again.

Jones, the senior heading to Georgetown, contributed four caused turnovers and five ground balls. It was his second consecutive game with at least four of each.

Zach Taylor scored two goals for Santa Margarita, and Dochterman and Quentin Buchman each scored one. Jack Allendar had one assist.

The Eagles struggled to possess, committing 18 turnovers, and were unable to capitalize on Chase Lynch‘s 13-of-19 advantage at the face-off dot. Santa Margarita put only 16 shots on goal in the game to 27 for Palos Verdes.