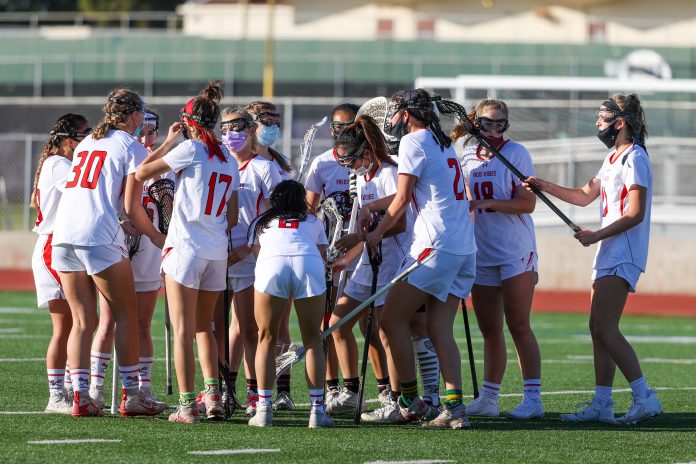 Junior Captain Harper Skeie won 77% of her draws outright and guided several more to teammates to hand her teammates 94% ball control 94% and a 21-1 win over Downey.

Downey entered PV’s season opener with two games and 1-1 record under their belts. However, it did not take the Sea Kings long to brush of the dust and get their well balanced offense rolling.

The defense’s lock down effort was equally impressive, allowing Downey just one goal and only rare visits to their offensive end. A Downey attacker had a quick first step and beat her defenders on a crease roll that found the off-side high part of the net.

Coach Todd Dearborn said “They had a lot of fun out there today in our 1st game, and expressed immense gratitude to just be on the field playing a real game after more than a year off due to the covid pandemic. This team has worked very hard among extraordinary circumstances and are showing amazing grit & resilience. We’ve had two new additions to our coaching staff as well bringing twin sisters Abbie & Brooke Merchant on after having graduated in just 2019 when they helped PV to the LA Championship, and then committing to Ft. Lewis in Durango, CO. I feel so lucky to have them on our coaching staff, and their connection to the team is undeniable, with some having played with them as teammates on the field as the ’19 Bay League & CIFSS-North reigning champs. A championship culture is tough to build, and our team has a long way to go to repeat, but this was a great start to a fun year ahead.”

The Bay League is very tough with rivals & perennial powerhouse Redondo, and the fast rising Mira Costa Mustangs both vying for both the Bay League & the CIFSS title given this is the 1st year the CIFSS will govern the season ending tournament playoffs for lacrosse.