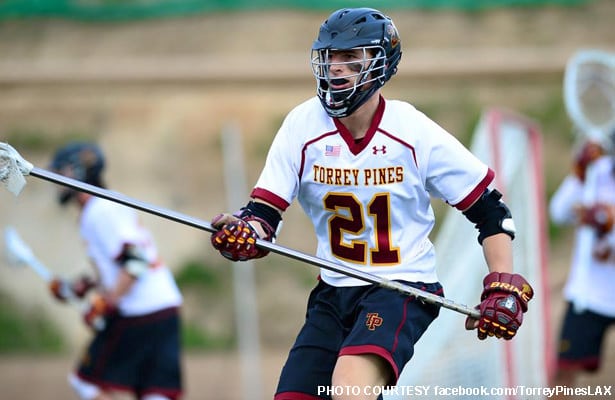 Defending CIF San Diego Open champion Poway led host Torrey Pines 1-0 after one quarter at Ed Burke Field on Tuesday, and the score was tied 2-2 in the second quarter. But the Falcons rattled off six unanswered goals to take a commanding 8-2 lead and went on to beat the Titans 8-4 in an early season rematch of last spring’s Open Division final.

Torrey’s Brendan Egan (Bucknell) and Marc Lefferdink each scored two goals to open the second half and create the six-goal margin, benefitting from Spencer Grant‘s dominance at the face-off dot (8 of 9 in the second half).

Poway (4-1) opened the scoring with an opportunistic quick restart by Jake Fiske (Bryant), who picked up the ball at midfield and raced in to score unassisted after a Torrey violation.

The Falcons (5-0) began to find their offense in the second quarter, with goals from Ara Suhadolnik and Josh Sherman (Ohio Wesleyan) giving Torrey Pines a 2-1 lead. Poway’s Harrison Greaves scored to tie it 2-2, but Spencer Grant (Michigan) and Shayne Grant (Richmond) scored to give Torrey a 4-2 halftime lead — a lead it would not relinquish.

Egan and Lefferdink finished with two goals each for the Falcons, and Suhadolnik, Sherman (1g, 1a), Spencer Grant (1g, 1a) and Shayne Grant (1g, 1a) also scored. Ryan Ramirez (Bryant) also had an assist.

Torrey Pines, ranked No. 5 in this week’s West Regional Under Armour/Inside Lacrosse experts poll, is off for a week before facing No. 2 Regis Jesuit (Colo.) on March 30. Poway is home against La Costa Canyon on Friday.