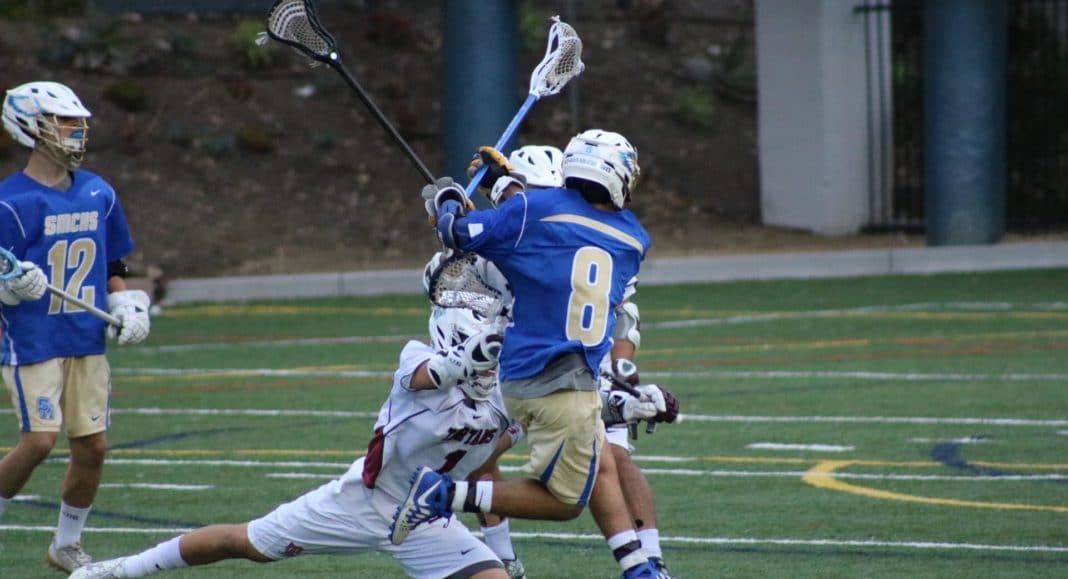 Ryan Sigal and the rest of the Santa Margarita defense proved to be unruly guests at Bellarmine Prep on Wednesday night. Playing aggressively all night long the Eagles shut down the Bells with eight turnovers and came away with a 9-4 win.  Sigal was the chief antagonist with three CTOs.

The win, which was their second in a row in the Bay Area, pushed Santa Margarita (5-3) to two games over 0.500 and more importantly gave some forward momentum to what has so far been a topsy turvy season for the Eagles.

It was not just Sigal and the long poles who helped out on defense.  Nicholas Parrino, who is one of Santa Margarita’s top offensive stars, stepped up defensively with two caused turnovers of his own. Ryan Olsker had an impressive 63.6 percent save percentage between the pipes and recorded seven saves.

Offensively, the Eagles were paced by Quentin Buchman‘s (4G, 1A)  five-point performance. Ryan You (3G) contributed a hat trick, and Parrino (1G, 1A), Michael Walsh (1G), Jack Allender (1A), and Connor Kentros (1A) rounded out the scoring for Santa Margarita.

The Eagles will look to sweep Northern California Friday when they take on Sacred Heart Prep (7-1).

Brandon Ross
Brandon Ross is a Digital Reporter/Editor for Maxlaxoc.com, entering his third year with the company. His experience in Sports Journalism began in 2014 where he served as a staff writer for Orange Coast College's Coast Report, mostly covering Sports. In the Spring of 2016, he moved onto The Daily Titan as an assistant sports editor, covering Division One College Basketball, Baseball, and Softball. He also served as The Daily Titan's "second in command" as the paper's Managing Editor, covering a variety of school and local news as well as help guide a young staff in an election season. During his spare time, he loves to travel and spend time with loved ones. For tips, please email Brandon at [email protected]