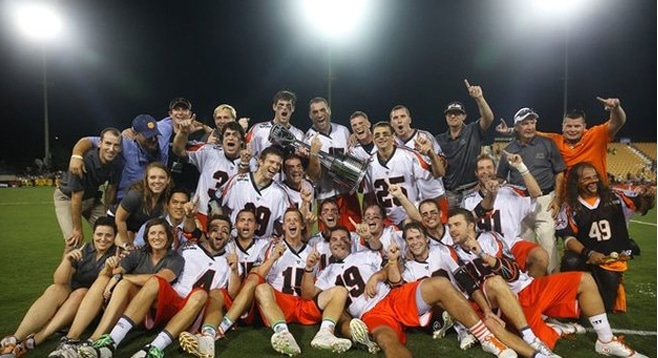 The Denver Outlaws won their first Major League Lacrosse Championship, defeating the Rochester Rattlers 12-11 in front of a crowd of over 8,000 fans at Fifth Third Bank Stadium on the campus of Kennesaw State University.

The game was exactly what one would look for in a championship game. It came down to the last minute, but in the end the Outlaws walked away champions.

Denver veteran Chris Bocklet started the scoring 19 seconds into the first quarter. The Rattlers, however, would take offense to one of the fastest goals of the season and scored five in a row by Michael Lazore, Miles Thompson, John Ranagan, Mark Cockerton and Dave Lawson. The first would end 5-1 Rattlers.

The second quarter was significantly more balanced and the Outlaws would close the gap going into the half 6-4. John Grand Jr. finally began to wear down his defender and scored his first of the game.

CdM assistant coach Jeremy Sieverts finally tallied his first about midway through the third quarter. The game began to get physical as both teams started to scrap for the lead, realizing what was on the line. Three straight goals at the beginning of the fourth by the Outlaws would tie the game and start the frenzy for the trophy. The Rattlers would push forward and lead by two with five minutes to play until Sieverts rocketed a two pointer (Sieverts’ specialty) past goalie John Galloway.

After saves from both goalies and the intensity still rising, Drew Snider put the game winner away with 56 seconds to play.

MLL veteran John Grant Jr., was named Championship MVP for the second year in a row, becoming the first player to do so. Head Coach B.J. O’Hara became the first coach in MLL history to win two championships with two different teams, the other being in 2008 when the situation was flipped and the Rattlers defeated the Outlaws.

Congrats to coach Sieverts and the Denver Outlaws!