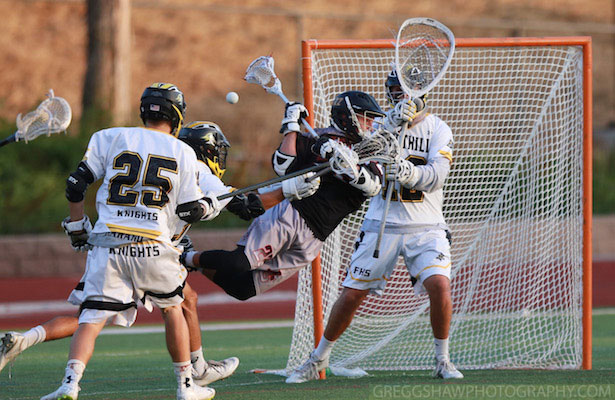 Orange County’s proximity to Hollywood was apparent Saturday when the county’s No. 1 seeds in both the girls and boys high school lacrosse playoffs were upset in storybook fashion, leading to a pair of finals few would have predicted heading into the weekend.

On the boys side, both No. 1 Foothill and No. 2 Corona del Mar were upset, granted by teams who featured in the Top 5 all season but few predicted would pull off big upsets on Saturday. Foothill was undone by a tenacious and focused JSerra Catholic team featuring a group of seniors who’ve been playing together since 8th grade. That group fended off perhaps the county’s most ballyhooed offense with All-Everything attack man Nate Marano (Denver) and a supporting cast of college-lacrosse bound seniors. JSerra’s shocking 14-13 overtime win puts seniors Logan Olmsted (Colorado Mesa), Jake Schleppy (High Point), Jimmy Yanes (Hofstra), Yuta Murata (Colby), Solomon Kennedy (UMBC), Nick Georgagi (Colorado Mesa) and coach Kyle Harrison into that finals for the second time as a group.

In the end, though, St. Margaret’s was able to prevail through a tenacious team effort and sensational goalkeeping by Payton Fales to win, 8-6.

On the girls side, No. 1 seed Mater Dei was upset by Beckman, 15-14, setting up a final against favored Foothill, which was the only higher seed who took care of business on Saturday, dispatching an always game Los Alamitos squad, 15-7.

Congrats to all of the teams in the semifinals. Now we’re off to what should be a pair of terrific finals on May 13 at Tustin’s Northrup Stadium.