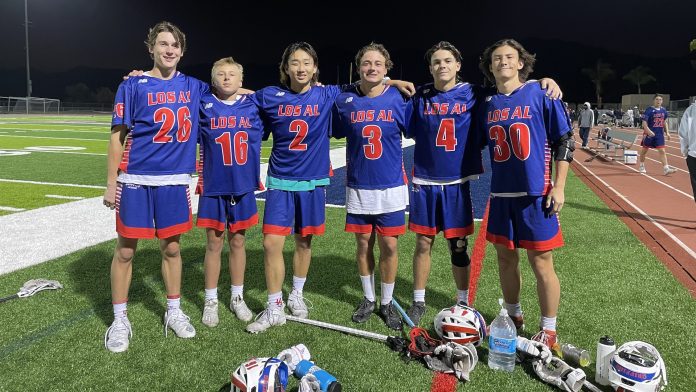 The fantastic finishes keep coming as Los Al took on traditional  LA power Palos Verdes Saturday.   Some fire power offensively for both teams and some big numbers posted as far as goals and assistants as the teams battled back and forth for 4 quarters plus over time. Ed Shean with 8 goals and 2 assists was sensational.  It was just play after play down the stretch  as the 2021 Ohio State commit dug in along with his teammates and coaches to pull out the OT win.   Hustle and poise were on display. Palos Verdes fell just short battling back from an early deficit to give the Griffs a run for their money.

Los Al jumped out to a 6-2 lead after the first quarter with Sean Park, Luke Glowaki, Shean and defenseman Julian Jenkins providing the goals.  In the second quarter PV started rolling as the Brad Sharp – TJ Underhill connection hit its stride. Sharp scored and created all day going five goals and four assists.  He was the main catalyst as shooter and feeder and was very good on the wings in Q4 on the face offs.  Kid looks like he’s hit the weight room hard.  Underhill had 8 goals for PV.  He was very slick at fading to the backside for open catch and shoot goals all day.  Excellent hands and accurate shooting for a big day. 9-7 Los Al at the half.

Los Al got it to 10-8 in Q3 on a Drew Anderson goal unassisted.  Anderson went two goals and three assists filling out the second part of Los Al’s dynamic scoring duo.  Underhill cut the lead to 10-9 and then Shean just went beast mode after that.  He got a goal off the ride intercepting a pass and hitting an open net.   This was the first of the five goals (five of Los Al’s six from late in the 3rd to the OT game winner). In Q4 his come from behind goals tied  it 12-12, 13-13 and 14-14.  Every time it looked like Los Al had run out of gas Shean knotted the score.  At the same time goalie Trevor Partlov got red hot.  He made two or three saves in the fourth quarter that were straight up robbery.  With 3 seconds to go he made a monster save keeping it at 15-15.   Game saving.

Los Al was man up in OT and called a time out.   Rumor has it Coach Glowaki the offensive coordinator went into his bag of tricks and ran a play his coach at U Delaware ran back in the da.  That coach was Scott Marr, now Albany head coach and one of the brightest offensive minds in the game.  Smart move, Anderson hit Sheen who fired a bullet changing levels low to high/off stick side for the game winning.   Shean put on a show!   Shooting was great, eight goals on 15 shots and I’m gonna guess he hit four of his last five or six shots.  Last two had smoke coming off of them.  16-15 final OT winner Los Al.  As a neutral observer jotting notes down all game I had to wonder why I was standing fist pumped in the air still seconds after the final goal catching myself.   It was just that good as a lax fan. It was an involuntary reaction to a baller and his teammates and coaches refusing to lose. Sharp for PV was all over the field as well, he left it all out there on the field, he did it all.  Also for PV 2024 Kaiden Suh LSM played the whole game and took plenty of face offs.  That is not easy for a freshman with the pace of this game and the energy it takes to face off.  That is to be respected.  Also some excellent adjustments by the Los Al staff.  I saw a couple adjustments not for print that were slick, also to be respected.