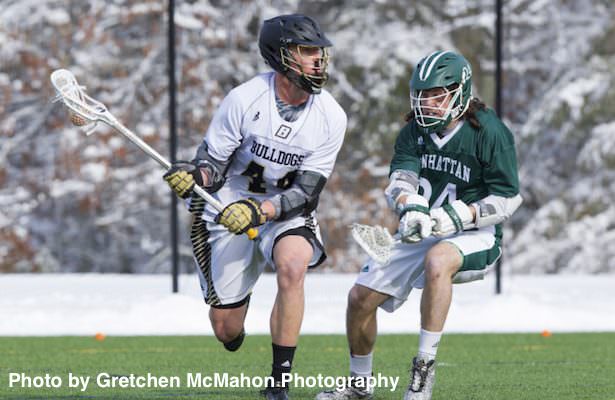 Former San Diego high school rivals Ryan Sharpe (Poway) and Cam Ziegler (La Costa Canyon) teamed up to lead Bryant University to a 16-3 victory over Manhattan on Saturday.  Sharpe and Ziegler each had 4 goals and 2 assists in the season opener.  The Bulldogs (1-0) are favored to claim their fifth-straight Northeast Conference title and earn another trip to to the NCAA tournament.  Watch the video above to see Sharpe (no. 20) and Ziegler (no. 44) in action.

The Bulldogs (1-0) jumped out to a 7-0 lead after the opening quarter and never looked back, seeing eight different goal scorers while 10 different players registered at least one point. Sharpe and Ziegler led the way, each posting the first four-goal games of their careers while adding a pair of assists apiece.

“It was nice to see those guys have career days,” said head coach Mike Pressler, now in his 10th season at the helm. “They let the opportunities come to them, and they made the most of them.”