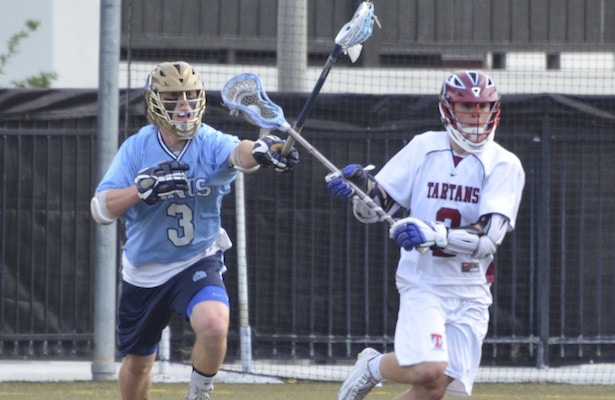 For some it has been almost a foregone conclusion since February that the two opponents in Wednesday night’s  Championship game would be Foothill and Corona del Mar. The Knights and the Sea Kings have been the clear No. 1 and No. 2, respectively, in every poll since Week 0. The only real debate was which team should be No. 1 and which team should be No. 2. However, Nick Shanks and his St. Margaret’s teams reminded us all yesterday that there is a reason why they play the games. Shanks’ six points (3 goals, 3 assists) were more than 16 teams could muster against the Sea Kings this year as he led the Tartans to an 8-6 victory and a trip to the finals for the second time in three years.

The Tartans fell behind 3-0 early before outscoring CdM 8-2 the rest of the way. The sharpshooting Tartans put 12 shots on net and found twine eight times while goalie Payton Fales was frustrating the Sea Kings with 11 saves at the other end of the field. Paddy Fallon, Samuel Harnisch, Kevin Cox, Conrad Hampson, and Zach Shor scored one apiece for the Tartans. Fales got strong support as usual from his defensive unit of Nick Totah, John Connelly, Fernando Delgado, Nick Iavarone, and Shor.

The Sea Kings finish 2015 with an 18-1 record. The Tartans face J Serra in the US Lacrosse-Orange County Chapter Championship game Wednesday night at Tustin High School.