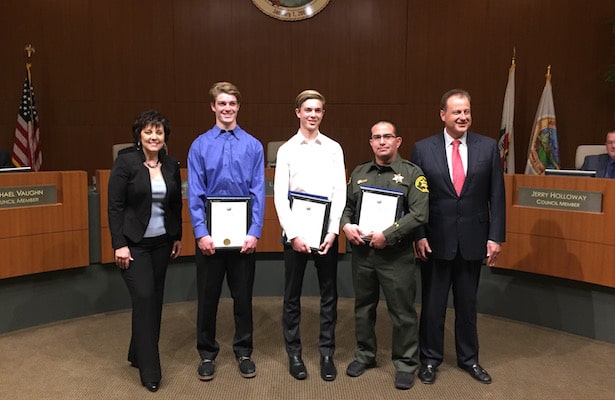 Santa Margarita Catholic High School lacrosse players Shane and Chad Cobb were honored by the Mayor of Rancho Santa Margarita in a ceremony at City Hall last week.  Mayor Anthony Beall granted the brothers a Certificate of Recognition for their roles in saving the life of a car accident victim on the evening of January 14, 2016.

The two brothers were driving home from lacrosse practice when Shane was forced to swerve out of the way of an oncoming vehicle.  The other car and its driver careened off the road and rolled down an embankment.  The quick-acting brothers dialed 911 and ran to check on the driver of the other car.  Shane said  “We finally found where the car had broken through the barb wire fence and saw the car at the bottom of the embankment which was pretty steep and went pretty far down. Without hesitation my brother and I both just started going down the hill as fast as we could. When we finally got to the bottom where the car was, we could not find any driver or passengers and began looking around the vehicle for anyone.”

With the assistance of  an off-duty firefighter who had seen the accident, the Cobb brothers discovered the driver trapped and unconscious under his car.  Shane “stayed down there with the driver while my brother and the off duty firefighter went up to talk to and direct police who were arriving on the scene.”

The police and paramedics made their way down the embankment,  and with the help of the Cobbs, they were able to lift the car off the driver, begin life-saving treatment and get him to the hospital.  The driver survived the accident, and the emergency responders determined that the quick-thinking and acting of the Cobbs saved his life.

Coach Adam Guy and his lacrosse team attend the ceremony at City Hall.  Coach Guy said  “I wasn’t surprised about their actions, Chad and Shane are both outstanding young men, they knew it was the right thing to do and just reacted to it.  We always talk about doing the right thing both on and off the field, and these boys showed us exactly what that means in a real life situation.”