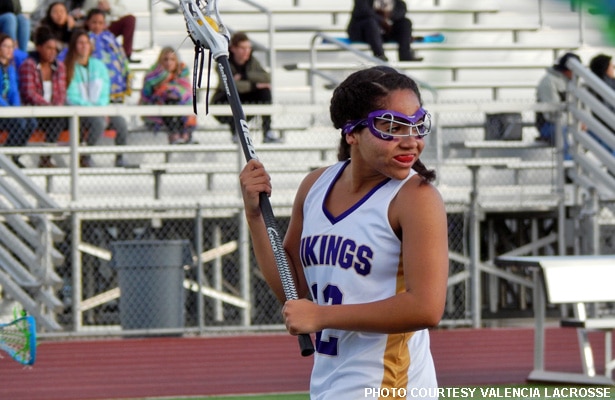 Friday was The Kiki Shakir Show at Valencia HS, as the sophomore attacker led a vicious Viking onslaught with six goals on eight shots and 10 ground balls. Shakir’s standout play brought the Valencia winning streak to four in the 15-4 win over Louisville HS. The victory brought Valencia to a 5-2-2 mark in their program’s first season.

Junior Kayla Konrad put the Vikings on the board a mere 12 seconds into the contest. Shakir scored on the next four possessions to put Valencia up 5-0 just three minutes into the game. Valencia would take a comfortable 11-1 lead into the half. Konrad finished with five goals and an assist along with nine ground balls.

As superb as the offense was for Valencia, the defensive play was what supported the lead as the game went on. The purple iron curtain was led by seniors Cassie White, Brooke Yamamoto and Lani Linzy, and sophomore Natalie Hussein.

Mandy Yamamoto supported Konrad’s output with a healthy midfield performance of her own. The sophomore scored twice and added eight ground balls. Sophomore linemate Chy Pagkalinawan scored twice from the midfield and also contributed greatly to a pressing ride between the lines. Freshman attacker Shelby Lewis had two assists in the win.

Valencia has now won five of its last six games in a push toward the playoffs. The Vikings close out their regular season playing host to La Canada on Monday and Westridge on Tuesday.