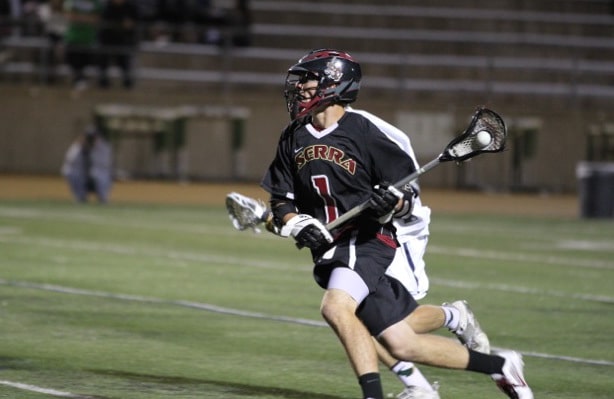 Jserra visited Huntington Beach on Tuesday night, and returned with a 9-8 win. It was back and forth game with several lead changes. Two players stood out, one for each team. Austin “Shack” Shackleford put on a clinic at the face off X. He won 18-20 draws.The second player was Grady Mercier, the Huntington Beach goalie. He made 18 saves on the night, including several one-on-one from five yards and in.

Emerson Roth started the scoring for Jserra in a first quarter that set the tone for the rest of the game. One minute after finishing top shelf on a tough move, Roth assisted on a Shackleford goal to make it 2-0 JSerra. The Oilers answered back with scores by Timmy Benson and Cayde Carthy (assisted by Mason Corkett). Logan Carroll struck back for Jserra on a quick dodge and rip low and away to make it 3-2 at the end of the first quarter.

The scoring pace picked up in the second quarter. Noah Willis scored for Huntington Beach to tie the game 3-3 for a very short period of time. Thirty seconds later Vince Cifarelli put the Lions up by one again on a nice move beforeCharlie Deamon made it 5-3 in favor of the lions. Unanswered goals by Kyle Hendrickson, Leo Leighton and Ayden Colbert in the final four minutes of the second quarter gave the Oilers a 6-5 lead at halftime.

The two teams continued to trade goals in the second half. Unassisted goals by Evan Jones and Carroll put the Lions back into lead. Huntington Beach struck back when defenseman Jeremy Anderson picked up a ground ball and went right down Beach Blvd for an unassisted goal. JSerra attack Hunter Neal was the difference maker down the stretch. His two unassisted goals on dodges off the wing gave the Lions a lead they would not relinquish. At 9-8 with 33 seconds to go Huntington Beach had a man up opportunity to tie, but turned it over and JSerra ran out the clock.