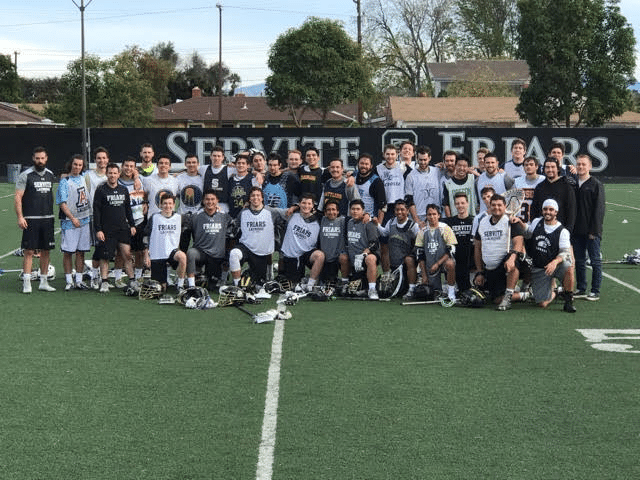 Servite Lacrosse hosted its annual alumni game on January 7, on Courage Field.  Over 15 different collegiate programs were represented by alumni who returned to their former home turf. As the program celebrates it’s 10th year in CIF this season, there was even a representation from the club days from the early 2000s. Former JV head coach Rob Almand (class of 2001) held down the seniority end of the alumni in attendance.

A majority of alumni games are often played between the current team and the alumni team. Servite runs its game a little differently, though. Abiding by a formation theme “Necessity of Other,” there is an emphasis to bond with former Friars. With such a large amount of alumni currently playing at the collegiate level, teams are constructed to contain both collegiate and high school players.  This style of game creates dialogue among the boys and helps bridge the gaps between current and former Friars.

Another great alumni game! Thanks to all the Lacrosse alumni that came out today. #credo #ForeverAFriar pic.twitter.com/oouDLaOAZK

“The game itself is the common bond between everyone in attendance,” head coach Tom O’Leary explained by email. It is one thing to conventionally play old vs. new.  By mixing the group, varsity players get to compete alongside those who currently play at the collegiate level.  As the game progresses, you see relationships and bonds being made by young men who may have never played on the same field before. In entering into my seventh season here at Servite, we pride ourselves on sending 70 percent of our seniors on to play at the collegiate level. Our alumni are very supportive and often make time to come back to support us on the sidelines. With five of our six coaches on staff being alumni from various years, and bringing experience from all different collegiate programs, we are focusing on surrounding our current players with men that can closely relate and help in the maturation process.”

The black squad, led by Almand, Chris Grijalba (class of 2007) and Tom Sanchez (class of 2015), squeezed out a hard-fought game with a 9-7 victory.  Over 30 alumni were in attendance to create a great start to the new year, and the opening to the Friars’ 2017 preseason.