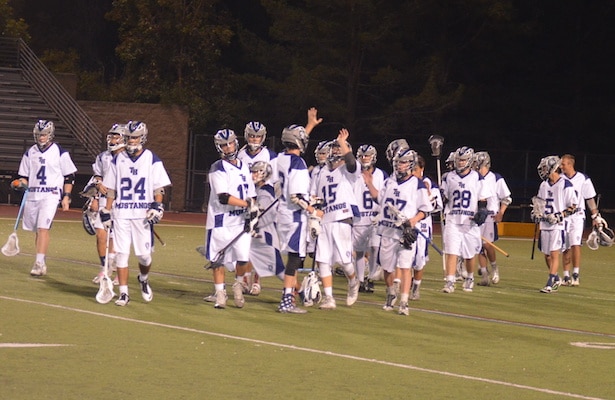 The No. 11  Newport Harbor Sailors found themselves in stormy waters on Thursday night as the Trabuco Hills  Mustangs rode into the second round for the first time in program on the strength of  some truly inspired play from their talented seniors. The Sailors came out in the first quarter with inspired play of their own and after Andrew Blume (4g, 1a) opened the game with an unassisted goal, Newport Harbor came right back with an unassisted goal of their own by Max Durante (1g) to knot the game at 1-1 after one quarter.

The Mustangs galloped to a 5-1 advantage at halftime on four unanswered goals, Jake Marthens (5g, 1a) finds cage twice, Andrew Blume (4g, 1a) gets his second of the night and Wyatt Koudelka (1g, 1a) rounds out the Mustang attack when he finds the back of the net.

Trabuco Hills continued control of the tempo and ground ball wars after the break.   The Mustangs got things going again early in the third quarter when Scott Barger (Towson) scooped a ground ball and found Billy Barron (1g, 1a) open on a fast break . Marthens racked up goals three and four including a great play when he intercepted a clearing attempt pass and buried it to bring the score to 8-1 in favor of the Mustangs heading into the final quarter.

After Marthens capped off his 6 point night, The Sailors Dane Flinn (1g) collected a nice feed from Alexander Pearce (1a) but it was too little too late.  However, Blume responded by putting an exclamation point on his 5 point night by ripping another unassisted goal. The Mustangs of Trabuco get an 11-2 victory.

According to Coach Johnny Rodriguez “The offense fought hard and played with poise throughout the game. The defense played physical and most importantly played together despite recently losing 2 starters. We really have a special group of guys. Nobody on this team is ready for this journey to end. We are back to playing our best lacrosse and with the heart these boys are playing with, we are ready forever who gets put on our plate. Our seniors really came to play tonight, on defense Ryan John, Justin Wetmore and Kyle Yano all stepped up their game to playoff quality work. What can I say about my boys on offense? Jmar (Jake Marthens) and Blumie (Andrew Blume) absolutely went off tonight and how appropriate is that?”

Next up for the Mustangs is No. 3 St Margaret’s on Thursday at 4pm.