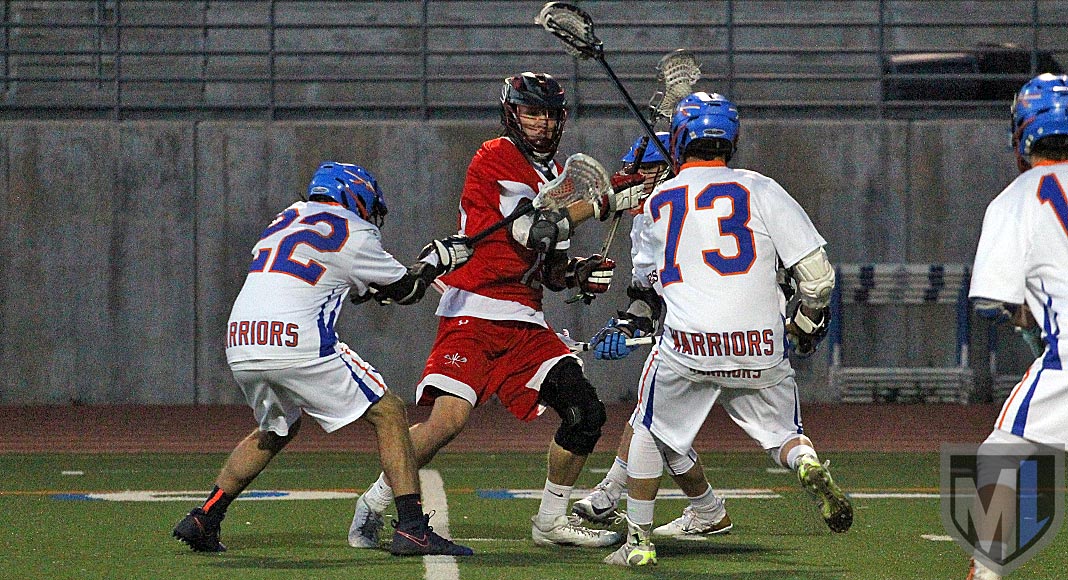 Senior middies Beau Sabosky and Jake Nolls scored back-to-back goals to open the third quarter Monday, breaking a halftime tie and sparking No. 2 Palos Verdes to a 17-10 win at No. 6 Westlake.

Throughout the first half, the Warriors had refused to let the Sea Kings open up a lead, responding to each Palos Verdes goal with one of their own. The score was tied 4-4, 5-5, 6-6 and 7-7. But PV coach Jimmy Borell said he challenged his seniors at halftime, and they picked it up.

“I put it on our seniors,” Borell said. “This is your team; it’s your communication. Guys like Hart Swan absolutely killed it for us tonight. We threw his big butt up on the wing, and he’s getting tough ground balls and being smart and making plays all over the field. I think he was kind of our energy there in the second half, our spark that got us going.”

“They got more disciplined; we got less disciplined,” Westlake coach Peter Swander said. “Their ability to work as a group and maintain a level of intensity outstripped us in the second half and left us behind. What was it, a 7-7 first half and 10-3 second half?”

Westlake was flagged for five penalties in the third quarter, giving Palos Verdes four extra-man opportunities. The Sea Kings cashed in only two of them, but that helped PV outscore the Warriors 4-1 in the period and build a 12-8 lead heading to the fourth.

The Sea Kings stretched their lead to 15-8 in the first few minutes of the fourth quarter.

Freshman goalie Jackson Hren got the Warriors off to a strong start, stopping three shots on Palos Verdes’ first possession. He finished with nine saves, five in the first half, and that early success keyed Westlake’s strong start. Sophomore Tyler Enderle and senior Seamus O’Brien each scored all three of their goals in the first half. Senior Duke Cohen also scored three goals for the Warriors, and junior Nick Reilly had a goal and two assists.

Borell said he was not surprised at how the closely Warriors played his team in the first half, but he was surprised that it took his guys until halftime to step up to the challenge.

“We saw it on film — flat out, this is a way more athletic team than we are,” Borell said of Westlake. “It is, especially when we are so paper thin right now with our best D middie [Jack Quinn] out and Bradley Sharp injured. It’s like, guys, we can’t play like idiots.

Palos Verdes (12-3) was playing its fourth game in seven days, three of them on the road against highly ranked opponents. The Sea Kings finish the regular season this week with home games against No. 5 Oak Park on Thursday and San Clemente on Saturday. Then comes the Bay League tournament next week and a likely high seed in the US Lacrosse LA playoffs, which begin May 1.