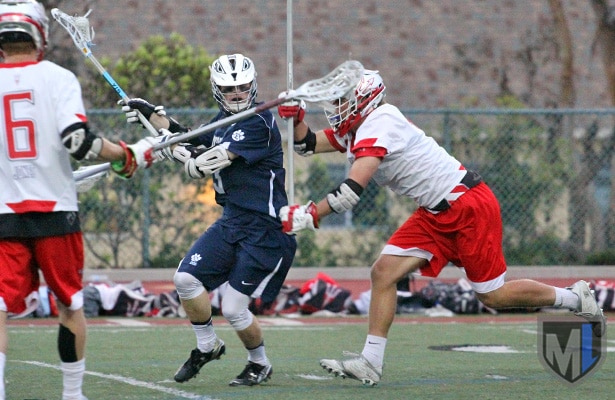 With a roster dominated by high-profile juniors, it was two senior captains who saved the day for Loyola on Wednesday, lifting the Cubs to a 7-6 overtime victory over top-seeded Palos Verdes in the US Lacrosse Los Angeles-area title game at Mira Costa.

At Mira Costa, senior attack Sean Smith scored his fourth goal of the game midway through the overtime period for the game-winner, dodging from X and shooting underhand, low to high, past Sea Kings’ goalie Connor Jongewaard.

Smith’s heroics were made possible by senior LSM Tommy Riley‘s goal, assisted by sophomore Henry Hasenberg in transition off a face-off win. That tied the score 6-6 with 2:53 play just seconds after Palos Verdes had taken its first lead of the game.

Riley’s goal was the first for Loyola since late in the second period, a 23-minute span during which Palos Verdes chipped away at the Cubs and turned a 5-3 deficit into a 6-5 lead.

It was the second meeting of the season between the two powerhouse programs, and the second in which Loyola built a lead while its zone defense held the Sea Kings in check. But it was also the second in which PV ultimately mounted a comeback. The first time, in April, that comeback ended in an overtime win at Loyola. This time the extra frame went the other way.

But the beginning was much the same. Loyola took a 2-1 lead after the first quarter on two goals from Smith. Junior Mason O’Hanlon and Smith scored back-to-back early in the second, and it appeared the Cubs had some momentum. Sophomore face-off middie Aidan Hesse was winning possession for Loyola, and PV’s offense was struggling.

But Sea Kings senior attack Aidan Westley (2g, 2a) scored unassisted to make it 4-2, then scored again in transition off a feed from junior Austin Lowi (1g, 1a), and suddenly it was 4-3 with 2:40 left in the half. Loyola junior Ryder Mora scored a man-up goal, assisted by O’Hanlon, to make it 5-3 at halftime.

But the Cubs’ offense wouldn’t score again until the overtime. The PV defense clamped down — Jongewaard would finish with 12 saves — and the offense began pecking away. Junior middie John Gressett drilled an outside shot on a feed from Westley to make it 5-4 early in the third. It stayed that way until five minutes remained in regulation, when junior Jack Larkin tied it 5-5 with a man-up goal.

Two minutes later, PV senior middie Peter Henkhaus lost his defender with a spin move, set his feet and ripped a shot past Loyola junior goalie Joe Theuer. The Sea Kings led for the first time with 3:14 to play, and the momentum was on their side.

Riley changed that, scoring in transition after Hesse won yet another face-off to tie it 6-6 and pump some life back into the Cubs and their fans.

Palos Verdes had a chance to win the game in regulation when senior attack Rizal Smith dodged from X and slipped inside along the crease line — reminiscent of the overtime goal that eliminated the Cubs from last year’s playoffs — but a trail-check stripped the ball, and Theuer stopped one final shot attempt as time expired. It was Theuer’s 11th save.

Hesse won possession to start the overtime — he won 11 of 15 face-offs overall — and Loyola called time out. Two minutes later, Smith ended it, sending Loyola to the section title game for the first time since 2009 when it lost to Foothill.

Could this be the year an LA team finally takes home the OC-LA trophy? Perhaps. Loyola didn’t play Corona del Mar this season, but the Cubs beat St. Margaret’s in their season opener. The Tartans lost twice to CdM this season.

If not this year, then maybe next: Loyola’s roster lists 16 juniors — three of whom are committed to NCAA D-I programs — five sophomores and six freshmen. On paper, it certainly appears this might be only the beginning for Loyola lacrosse.

For Palos Verdes, the loss marked the end of an incredible run for its Class of 2016, three of whom — Henkhaus, Smith and Jarrett Jones — played in the LA title game four consecutive years. PV won the title in 2014 and 2015. But don’t write off the Sea Kings just yet. A quick scan of their roster lists at least 10 underclassmen who contributed in meaningful ways this season, including two who are committed to NCAA D-I programs.

More than a changing of the guard in LA lacrosse, this might be the beginning of a heavyweight rivalry.