GLax Preview: No.2 Foothill vs. No.6 Newport Harbor 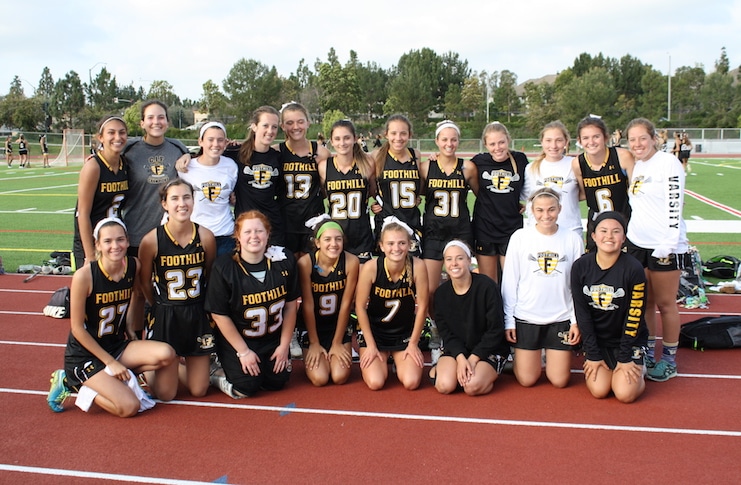 Matchup: No.2 Foothill plays No.6 Newport Harbor at Portola High School at 12:45 p.m.

How Foothill got here: Foothill defeated Capistrano Valley 15-4 in the first round and edged out Santa Margarita 16-15 in the quarterfinals.

Players to watch for on Foothill: Brooke Williams helped burn the Sailors the first time around, as she scored four goals. In addition, she scored seven goals against Santa Margarita, including the game-winner. Other scoring threats for the Knights are Lauren Kilger (who had three goals against Newport Harbor in the first matchup), Emily Gaughran, Brie Ratkevich and Ava Brand. Goalie Becca Nailon has kept most of the opponents to less than eight goals per game.

Players to watch for on Newport Harbor: Adena Rothbard has only played three games ever since suffering a concussion, but she’s made a tremendous impact since her return. She scored four goals against Los Alamitos and two goals against Trabuco Hills. Sarah Farley the senior commit to Belmont Abbey recorded three goals against Los Alamitos and two goals and two assists against Trabuco Hills. Farley is second on the team in goals with 41. Other players to watch for are Katie Hendrix, Laura Tran, Caroline Farley and Heather Roberts. Goalie Jade Rettig has had a combined 20 saves in the two playoff games and 116 saves on the year.

What you should know: For the second year in a row, the Sailors and the Knights will be clashing in the semifinals. Foothill, which was the No.2 seed last year, ended Newport Harbor’s (10-seed) Cinderella season by beating them 5-1 in last year’s semifinal.

The Sailors, making only their second appearance in the semifinals in team history, have never beaten the Knights. The Sailors won both of their playoff games by one goal and are 4-1 in games decided by one goal.

While the Knights are favored to win, consider this; The Sailors’ defense has clamped down when it has needed to in both of their playoff wins. The Sailors held Los Alamitos scoreless in the last 8:25 of the game and held Trabuco Hills scoreless for the last 23:18 in the second half.