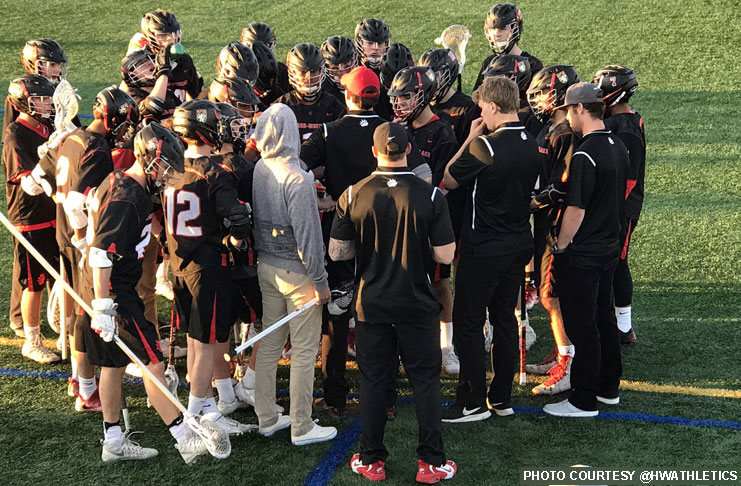 Third-ranked Harvard Westlake scored four times in the last five minutes of the first half Friday, breaking open a tight game and building lead that held up in an 11-7 win over visiting No. 5 Westlake.

Harvard Westlake led 4-2 on a goal by Tommy Park just eight second into the second period, but Westlake evened it on back-to-back goals from Carson Kuhl and Duke Cohen one minute apart to tie it 4-4 with 9:55 left in the half.

The score remained 4-4 until Harrison Listen scored consecutive man-up goals to spark a four-goal run and put Harvard Westlake up 8-4 at the break. The Wolverines led by as many as six in the third period. Westlake scratched back to make it 10-7 but could get no closer.

Listen (3 goals, 2 assists), Park (3g, 1a) and Paul Rodriguez (3g, 1a) led the scoring for the Wolverines, who improved to 4-0, with all four wins coming against teams ranked in MaxLaxLA/US Lacrosse Coaches Poll Top 20. Zac Harleston 91g, 1a) and Brooks Hudgins (1g) also scored for Harvard Westlake.

Kuhl had two goals and two assists to lead Westlake (0-1), which was playing its season opener nearly two weeks after many other teams. Cohen (2g), Spencer Tyoran (2g) and Grant Barclay (1g) also scored for the Warriors. Senior goalie Matt Kilkeary was credited with 12 saves.

Harvard Westlake is home to Crespi on Tuesday in the teams’ Mission League opener. Westlake plays at Simi Royal on Tuesday.