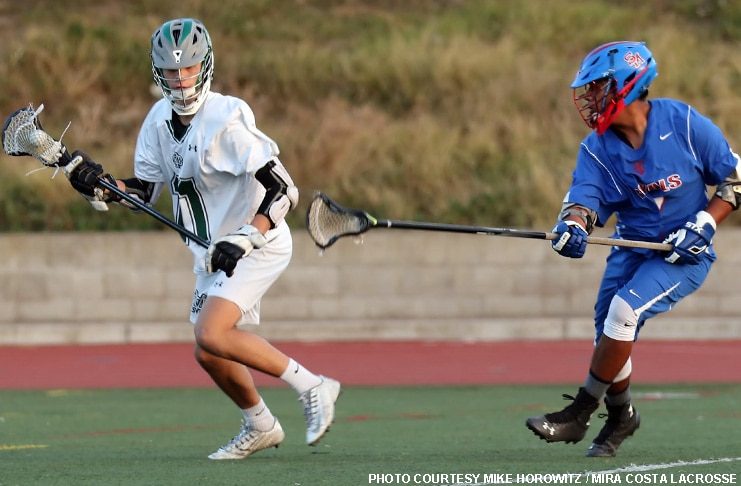 Sophomore Josh Maruyama scored Costa’s first goal of the second half, tying the score 5-5, then assisted on the next two, giving the Mustangs a 7-5 lead with 6:22 left in the third quarter. Maruyama finished with two goals and six assists.

The Royals (14-3) completed the best season in the San Marcos program’s brief CIF history, winning the Channel League, rising as high as No. 18 in the US Lacrosse/MaxLaxLA coaches poll and reaching the Invitational title game after playoff wins over Glendale and Culver City.

By halftime, it was clear the young program had come to play. Junior Justin Lehman scored the Royals’ first three goals, keeping them within 4-3 of the Mustangs. Middie Shea Rousseau tied it for San Marcos with 4:13 left in the second quarter, and Trey Tank put the Royals ahead 5-4 a minute and a half later. An apparent Costa goal by Casey Bonner was ruled to have come after time expired.

But the third quarter belonged to the Mustangs. Maruyama scored unassisted with 9:22 to play, then connected with Miles Choromanski two minutes later and with Zach Horowitz a minute after that. Suddenly Costa led 7-5 and was rolling. After Lehman pulled San Marcos within one, Macallan Laver and Bonner each scored to close out the quarter with the Mustangs leading 9-6.

Goals by Choromanski and Bonner to open the fourth period, both assisted by Maruyama, pushed the Mustangs’ lead to five with eight minutes to play.