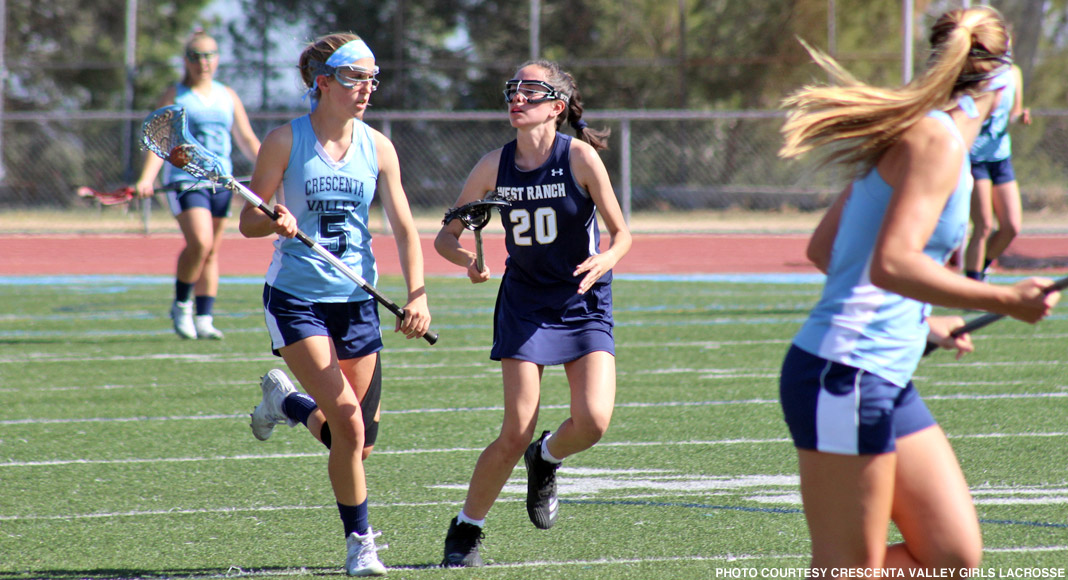 No. 5 Crescenta Valley rattled off six unanswered goals in the second half Tuesday, opening up a big lead over No. 6 West Ranch in what turned into an 18-14 victory in Pacific League play.

The win clinched second-place in the Pacific League behind No. 4 Glendale for the Falcons (12-3, 3-1), while the Wildcats (8-4, 1-2) can clinch third place with a win over La Canada on Friday.

“It’s funny,” Falcons coach Boz Crowther said. “They were our very first game [in 2015], and kind of a surprise. I thought our AD had mixed up the game we had two days later against Westridge. We really weren’t prepared but managed to pull out an 8-7 win in overtime.”

The Falcons scored first, only 18 seconds into the game, when Lexi Ballard hit Francesca DiMundo for the opening goal. West Ranch’s Hope Jin collected the ensuing draw and scored 12 seconds later to set the stage for the remainder of the first half.

Each team held a two-goal edge at some point, but neither team could extend the lead beyond that. Bella Gervasi scored the last goal of the half for West Ranch with 14 seconds remaining, and at halftime the Falcons led 9-8.

The second half looked like a carbon copy of the first, as Gervasi scored her third goal in a row off the opening draw to tie the game 9-9, but that’s when the Falcons found another gear. They scored the next six goals to build a 15-9 lead with just over 15 minutes to play.

CV eventually built the lead to 18-11 before West Ranch put on a final surge, scoring the last three goals of the game, including two in the last minute, but ran out of time.

“We knew going in that this was going to be a track meet,” CV assistant Brent Ballard said. “We knew they were really good in transition with the Jins, Bella [Gervasi] and Maddy Spell, but we also thought our settled offense was better than their settled defense. We just reminded the girls at halftime to play to their strengths.”