Second Half Burst Helps Yorba Linda Get Past Newport Harbor 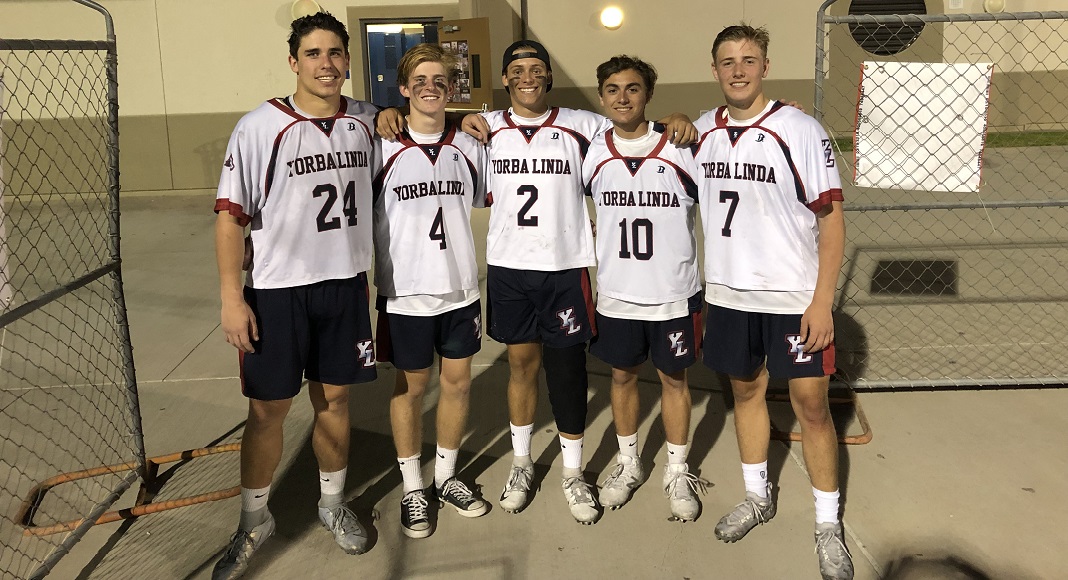 The No. 4 Yorba Linda boys lacrosse team outscored No. 8 Newport Harbor 9-1 in the 30 minutes of the game to solidify their Top 5 ranking with an 11-5 victory on Wednesday at Yorba Linda High School. The Sailors led 4-2 midway through the second quarter before succumbing to the faceoff prowess of Yorba Linda’s Ryan Henry and the Mustangs’ pressure defense.

“I think both teams were scrappy. In the second half, we just got a couple more extra bounces than they did,” Mustangs coach Mike Schreiber said.

The upset-minded Sailors started out strong by scoring the first two goals of the game and and keeping the Mustangs off the board until Brock Melanson (2 goals) chopped the lead half, leaving the score 2-1 in favor of Newport Harbor after one quarter.

The teams traded goals to open the second quarter and when Michael Morrison boosted the Sailors’ lead up to 4-2 at the 6:23 mark of the second quarter it appeared this game may go down to the wire.  But the triple threat of Yorba Linda’s team defense, Henry’s domination at the dot and Jason Bohlinger‘s (10 saves) presence in the net took its toll on Newport from that point forward.

While Bohlinger was holding Newport Harbor to Aiden Goltz‘s lone goal over the final 30 minutes of the game, the offense took advantage of the extra possessions provided courtesy of Henry. With Tanner Fitch and Wesley Dale (3 goals apiece) leading the way, the Mustangs pulled away with 9-1 surge to close out the game.  Zac Hardison (2g) and Miles De La Rosa (1g) completed the Yorba Linda scoring.

Henry, a UMass-bound junior, showed his resilience by bouncing back after a sub-par performance against St. Margaret’s last week.

“I think after the St.Margaret’s game, it kind of woke him (Henry) up, because he took a nice little beating. He just refocused himself and he’s just dedicated to doing the best for us and getting us where we need to be,” Schreiber said.

After the game, Yorba Linda celebrated its senior night by honoring its five seniors; (from left to right pictured down below) Ashton Matthews, Tyler Krause, Hardison, Dale and Bryson Bissonnette.

Goltz led Newport Harbor with two goals while Morrison, Rhett Farmer and Braydon Butler each had one goal. Garrett Rovazzini made 15 saves for the Sailors.

“They made plays when we didn’t, that’s the biggest difference. We knew they were athletic and we knew their tendencies. They’re exactly who they thought they were,'” Sailors coach Mark Todd said.

Up next for the Mustangs (15-2), their regular season finale game at Santa Monica on Friday at 6 p.m. The Sailors (11-8) conclude their regular season on Saturday at home against Servite at 11 a.m. in yet another game that the seeding committees will pay close attention to.