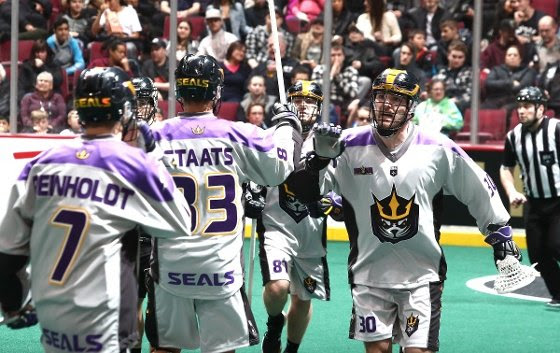 There has been so much talk about lacrosse being the fastest growing sport in the United States in the last few years, especially on the grassroots level. One area that the sport has really taken off is in Southern California, where more than 100,000 young people have taken up the game in the last few years alone, and high school and some college programs have begun to take root.

Another area where lacrosse is growing in SoCal is on the professional side, where the San Diego Seals (@SealsLax), owner by former Yale lacrosse player and cofounder of Alibaba (@AlibabaTalk) Joe Tsai enjoyed a near sellout and a win over the Rochester (NY) Knighthawks in their National Lacrosse League (@NLL) home opener last week.

What made the win even more historic was the fact that the Seals, seeing a marketing opportunity for both the professional side and for fan development, became the first team ever in the NLL’s 33 year history to broadcast games in Spanish.

The Seals brought on Síntesis TV (@sintesis_tv), which serves the San Diego and Baja Mexico region to carry their home games. Síntesis TV was founded in 1985 and offers objective and truthful information about the Baja California region, also at a National and International level. Síntesis TV broadcasts through open television signal in San Diego County and Baja California on channel 50.4 and in Northern Mexico channel 71 IZZI. Osvaldo Samaniego and Jorge Camacho called the game, and will be back in the broadcast chairs for the remainder of the schedule, a portion of which will be carried in English on Bleacher Report Live (@brlive), with continued talks of a local English language carrier also in the mix.

But Lacrosse in Spanish and in Mexico? “The Latino sports fan in Southern California remains one of the most passionate and ardent, and we see this as the perfect way to introduce the sport, the team and the brand to that audience from day one,” said Josh Gross, Vice President, Business Operations for the Seals. “There are thousands of people who cross the border both socially and for business from Tijuana to San Diego and vice versa, and we want to be able to bring what we are doing to them in a way that’s easy, and this partnership we felt is a natural to cultivate fans in the entire region.”

The partnership also makes great sense for Síntesis, which is also looking to expand its audience, and sees the Seals, and live sports as a great fit.

“We want to introduce and bring the sport (of lacrosse) to Mexico, and if possible someday through our live stream to other countries, with our partnership to broadcast Seals games, our audience will see this great fast paced game that embodies teamwork and high spirit action,” said Octavio Islas, Producer/Company Consultant for Síntesis. “We are planning to also create entertaining short film like tutorials and promos to introduce and promote the game, the Seals and league play to the Mexican, Latino, Central and South American audiences. It is a great growth opportunity for the team, the station and for lacrosse that didn’t exist even a few months ago.”

The model for NLL and the Seals is not dissimilar from the toe dip we have seen MLB (@MLB), the NFL (@NFL) and the NBA (@NBA) make in recent years into the Mexican market. Even the NHL’s Los Angeles Kings (@LAKings) have started to look south to grow audience, all seeing the cultural and brand success soccer has had in taking Liga MX (@LIGABancomerMX) matches and the Mexican National team north for exposure. That exposure brings new fans at all levels, and with that come brands looking to get more engaged with a growing diverse audience that is becoming more affluent and engaged.

“Our games are exciting, affordable and the sport caters to a demo that likes fast-paced,” Gross added. “Those aspects speak a lot louder than the language the game is broadcast in, but in being able to deliver a Spanish broadcast makes the barrier of acceptance just that much lower, and we think has a huge upside.”

While other pro franchises in So Cal have looked to the traditional Anglo audience first, the Seals, with their multicultural first play, are following in the disruptive growth pattern that has made NLL such a hot property in recent years. Indoor lacrosse is not your traditional sport, but its traditions run deep in lacrosse culture, and if its new franchise in San Diego can help unlock a Latino audience, the audience growth will be quite impactful, well beyond Southern California.