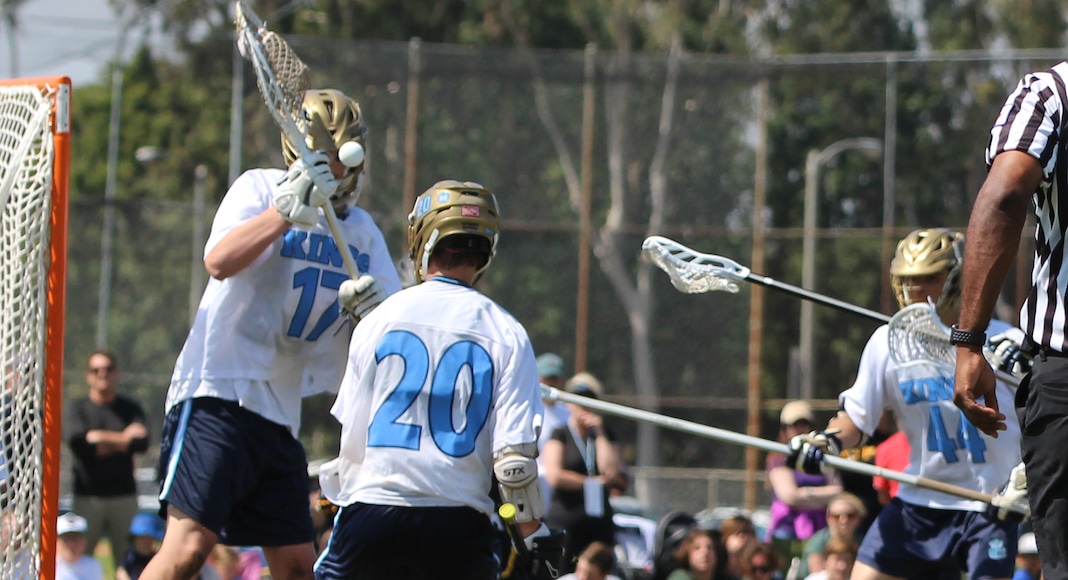 There are still two weeks left in April, but many games are already being played with a playoff-like intensity as teams jockey for position in the upcoming playoffs.  Saturday’s tilt between No. 5 Trabuco Hills and No. 7 Corona del Mar was one of those games.

It’s no secret that the Sea Kings are a bit more vulnerable this year than in years past, and Saturday’s game presented the Mustangs with an opportunity to not only defend their no. 5 ranking but perhaps also pull out a first-ever win over CdM.  Saturday would not be that day though.

The Mustangs and Sea Kings went toe to toe for 48 minutes but in the end, thank in large part to 11 saves from Kyle Cord the Sea Kings slowed down Trabuco’s white-hot offense and pulled out an 8-7 victory.  The Mustangs averaged 14 goals per game in the seven games prior to bumping into Mr. Cord and the Sea Kings.

“Every wins a big win for us. We will take and we’ll move on. We got a lot of young guys out there now playing some pretty critical roles. It’s nice to see them compete and give us an opportunity to win a game,” CdM coach G.W. Mix said.

The Sea Kings led throughout most of the game and each time the Mustangs would draw closer, the Sea Kings found a way to push its lead back up again.

The Sea Kings led 4-3 at halftime and came out strong after the intermission to open up a 6-3 lead. The Mustangs, however, reeled the Sea Kings back in with three unanswered goals with  Jared Friesen tying the game at 6-6, which wound up being the third quarter score.

The Mustangs took their first lead of the game at 7-6 when AJ Switzer‘s shot went in after it deflected off of a CdM defender’s stick. The Sea Kings knotted the score at 7-7 thanks to Bobby Purcifull‘s shot with 6:26 left.

Chandler Fincher led the Sea Kings with three goals while Hall and Purcifull had two goals apiece. Nick Meisenheimer added a goal for CdM, which shut out Trabuco Hills in the last 10:55 of the game.

Tyler Payne led Trabuco Hills with three goals while Friesen had two. Switzer and Holden Evans had one goal apiece while Chris Demarco made four saves.

“I was really surprised with our offense that we had that much difficulty because we haven’t all year. Their goalie [Cord] was unbelievable. Our defense played great and defense is what has been our problem. The effort was really really good. Payne was great. He’s a great finisher, he shoots over 100 miles per hour, we have that clocked. We’ll get over the hump,” Mustangs coach Eric Bassett said.

Bassett also highlighted the play from Colin Seedorf who won a majority of the Mustangs’ faceoffs.