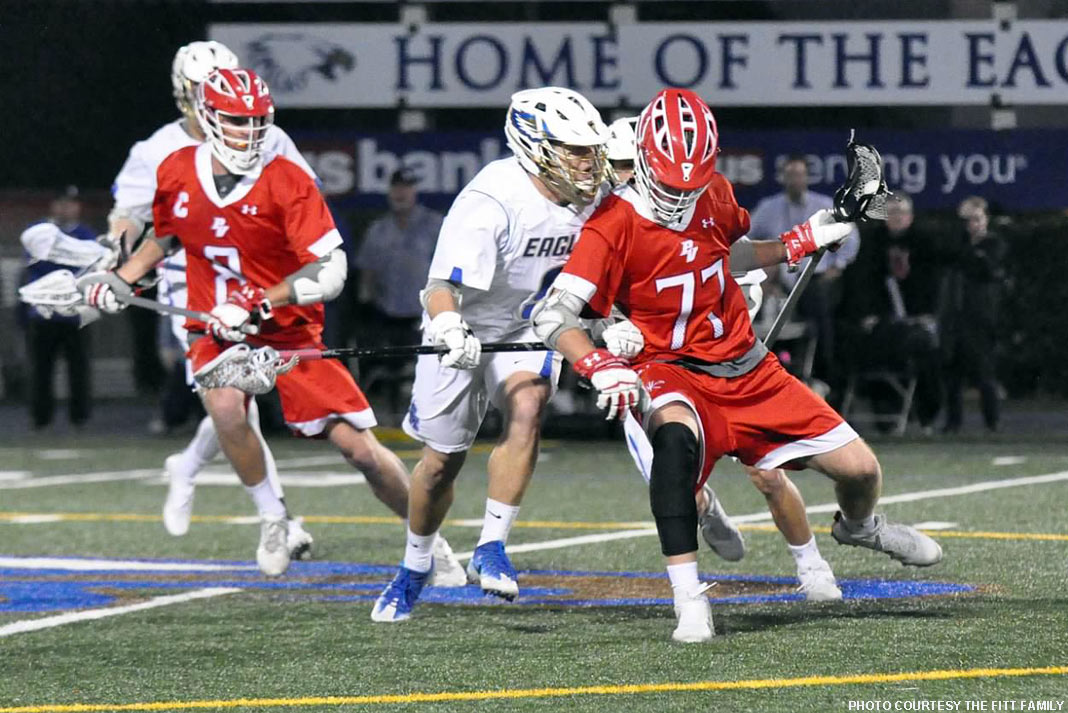 “CNU was the right choice for me,” Fitt said via email, “because the school was strong academically, I really connected with the coaching staff, it has a beautiful campus and it’s the perfect size for what I was looking for. After touring the campus and talking with the students and athletes, it solidified my decision. It seemed perfect.”

“He was looking at a lot of the D-IIIs for facing off,” Borell said via text, “and Brett Hughes has a great relationship with [head coach] Mikey Thompson at CNU through Lacrosse the Nations, and Mikey really liked him, and Colin liked the school, so it ended working out great.”

Fitt said Hughes also helped him navigate the recruiting process by advising him to narrow his search and target schools he’d like to attend and play lacrosse.

“I was somewhat late in the recruiting process, since I hadn’t taken a face-off before my sophomore year in high school,” Colin Fitt said, “so I wasn’t on too many coaches’ radar. This summer, I dedicated a lot of time to the summer tournaments and showcases, and it was Brett Hughes who recommended I choose a handful of schools and go to their prospect camps. He said try and choose them instead of waiting for them to choose you. Lucky for me one of the ones I chose, chose me too. Thank you, CNU.”

After playing LSM as a freshman — in a program loaded with long-pole defenders — Fitt approached Borell and asked how he could get on the field.

“There were a lot of D guys ahead of him — Jarrett Jones, Shayne Sharp, Matt Nagy, Kyle McBride, Hart Swan, Josh Park,” Borell said. “It was going to be a tough lineup to crack. I told him we didn’t really have a face-off guy.”

So Fitt changed positions, earned the job and won 71 percent of his draws as a sophomore, earning second-team All-Bay League honors that year and first-team as a junior last spring.

“He has worked extremely hard on his craft and in the weight room,” Borell said, “He’s a bigger guy now at 6-foot-3, 200 pounds, and if he doesn’t win the initial clamp, he’s able to counter and scrap and make it a 50/50 ground ball or win it himself. He gets better and better, and I’m excited for his senior year.”

“I would credit all four of my high school lacrosse coaches,” he said. “Coach Jimmy Borell for pushing me to be my best and work on all aspects of my game; Coach Brett Hughes for his guidance in both lacrosse and life, [which has] helped shape who I’ve become today; Coach Zach Rogers for launching my face-off career by having me turn in my long pole for a position I had never tried; and Coach Ian Mills for developing and refining the skills I need at the face-off dot. I should also credit/thank Mr. John Barry and Mr. Sung Park for getting me into the sport in the very beginning.”