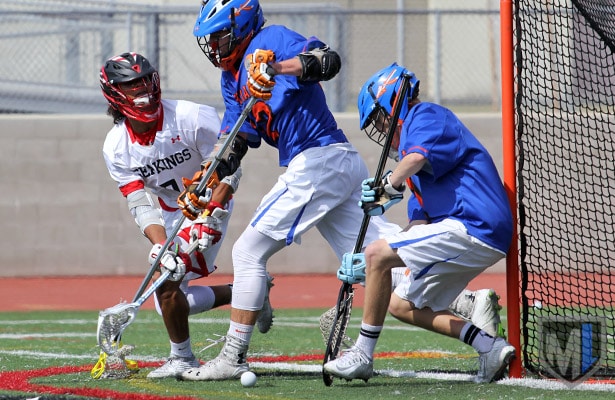 The No. 1-seeded Palos Verdes Sea Kings have lived on their defense all season, and Saturday that unit carried them into the L.A. title game for the seventh consecutive season with a 9-5 semifinal victory over No. 5 Westlake.

The Warriors (16-2) came in averaging 14 goals per game and had been held to single digits only once — in their lone previous loss, 15-8 to semifinalist Thousand Oaks. But the Sea Kings (16-5) allow fewer than seven goals per game on average. Saturday, Westlake managed only one goal in each of the first three quarters as Palos Verdes built a 7-3 lead.

Senior goalie D McCann anchored the defensive effort, recording 15 saves and short-circuiting at least two Westlake possessions by intercepting cross-crease passes. Westlake took 20 shots in the first three quarters and put 15 of them on cage, but McCann turned a dozen of those away.

While the defense kept Westlake in check, the offense chipped away. The Sea Kings took a 3-1 lead late in the first period when senior middie Stanny Gilbertson torched the Westlake defense for back-to-back unassisted goals. A running back on PV’s championship football team, Gilbertson juked his on-ball defender going left, then jump-cut to the right and past the sliding help defender to gain an unobstructed view of the Westlake cage.

The Warriors spent much of the rest of the game playing shut-off defense against Gilbertson to deny him the ball, and that left the rest of the Sea Kings to play 5-on-5. The extra space — and one less potential help defender opened things up for Palos Verdes.

Junior Rizal Smith capitalized in the second quarter, scoring on a back-handed flip from the doorstep to make it 4-1 then feeding Aidan Westley for a 5-1 lead. Smith and Gilbertson each finished with two goals and two assists. Westley scored three goals, Austin Lowi had a goal and an assist, and LSM Jones scored one goal.

Palos Verdes advances to Wednesday’s L.A. title game (7 p.m., Culver City HS) opposite Crespi, which rallied late to beat host Thousand Oaks 14-13 on Saturday. The Sea Kings opened their season at Crespi on March 9 in a game in which they built a 9-2 lead late in the second quarter only to have the Celts come roaring back to force overtime before Palos Verdes won 13-12.