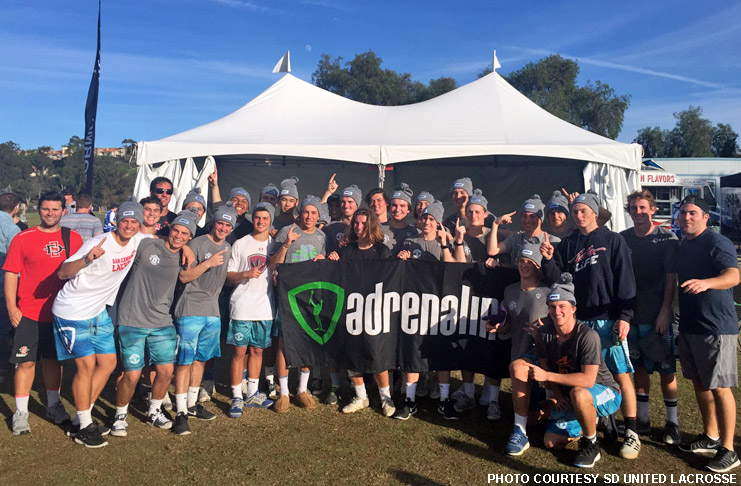 SD United Elite capped an incredible weekend at the ADRLN Challenge on Sunday, beating RC Elite in overtime to claim the championship of the Elite A Division.

United trailed 4-1 early in the first half but came out of a time out on fire, rattling off four unanswered goals to take a 5-4 lead. RC quickly answered, tying it 5-5 going into the half.

The second half was a back-and-forth battle, with both teams exchanging leads. David Howren (San Clemente ’17) scored late in the fourth to bring United within one goal. Then Andrew Beacham (La Costa Canyon ’17; Towson) stuck a beautiful off-stick hip shot from the low wing off a three-pass exchange to tie the game.

In overtime, goalie Nate McPeak (Eastlake ’17; Syracuse) came up with two huge saves on the doorstep, returning possession to SD United. Shea Peters (Carlsbad ’18) capitalized, scoring on an impressive high-to-high rip on the run down the right alley from 15 yards out.

In its second year, SD United has established itself as one of the premier clubs in the West. The club caters to all players within San Diego County. For more information on the program or to register for the team’s tryout (Sunday, Jan. 29, at Rancho Bernardo HS), CLICK HERE.