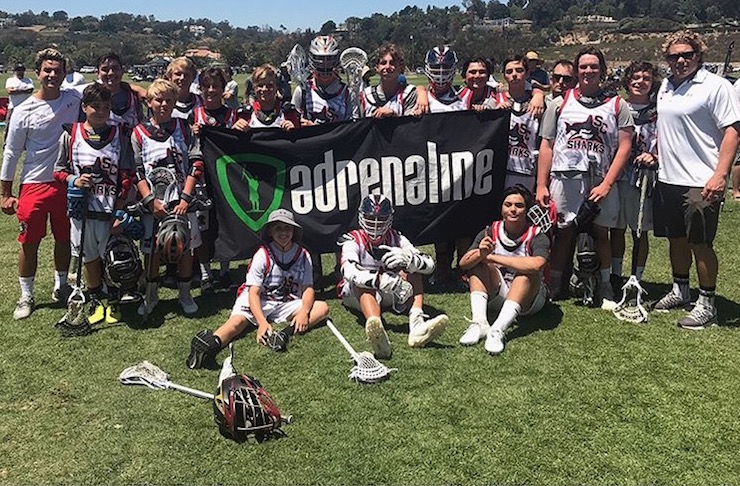 Brendan Finnerty’s SC Sharks went three for three at America’s Finest Rivalry in Del Mar this past weekend. The Sharks entered three teams into the tournament and all three came home with championships. The three teams combined for a record of 14-1-1.

The 2021 Sharks (pictured above), coached by Nick Lemus, went undefeated on the weekend. This was a special team because of such a wide variety of players. The team ranged from players like Davis Grace who was playing lacrosse for the first time to players such as Jack Rogers who has had a stick in his hand as long as he can remember. This team was led by exceptional efforts by Ed Shean and Jaden Freeman.

“Ed is the best 8th grader I have seen play as he is the complete player who has no off-hand and also has a great vision for the field,” Lemus said. “Ty Xanders better be on the lookout for him.”

Shean shined when it mattered most as he had five goals in both the semi-final and championship games. Freeman was all over the field. Whether it was winning face-offs, stripping the ball, or scoring goals, Freeman was making plays. Overall it was a great team effort.

The Sharks Red team, coached by Dennis Anderson, avenged a pool play loss on Saturday to win the Vendetta High School Boys Division championship. After winning the first two games on Saturday, the Red team suffered their only one loss to 3d Southland. 3d and Sharks lined up against one another again on Sunday in a championship game rematch. Only this time the outcome was opposite with the Sharks coming out on top. Owen Africa and Chandler Petri teamed up to lead a lockdown defensive unit that held opposing teams to single digits throughout the weekend. On the other side of the ball Aidan Fallen, Kenton Wilson and Casey Finely kept finding the back of the net.

Last but not least, the Elite Team coached by Marshall Neal and Brendan Finnerty, claimed the Gatorade Elite Boys Division Championship. The team was loaded with talented individuals including many all-county players. Yet adversity struck as both Liam Nelson and Jake Brannon departed for a recruiting event in Maryland leaving the team shorthanded. There was no need to worry though because the Sharks still had Branden Wilson and Jason Kuao, a dynamic duo who carried the team’s offense. Both players also received attention from college coaches as Coach Marshall was approached by a recruiters on multiple occasions.

The sharks ended up in the finals versus Beach Burn with whom they tied on Saturday. Goalies Kelly Petro and Eugene Kang were great leaders on field, commanding the defense with the help of Nick Amico and Dylan Hartanov playing pole. Wilson had four points in the finals, pioneering the Shark’s third championship of the weekend for Coach Brendan Finnerty.