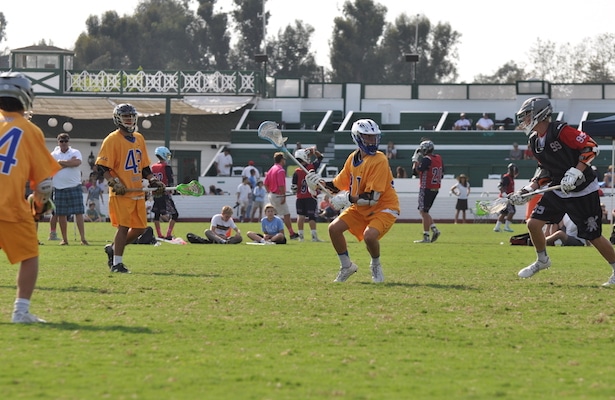 The Orange County Class of 2018 is well represented at the SB Showdown in Santa Barbara this weekend.

Santa Margarita Catholic High School sophomores Nick Parrino and Matt Ury,  and El Toro High School sophomore Jackson McKenney (center in the picture above) are getting a little taste of what playing for UCSB could be like.  The trio are playing for Gauchos Select 2018 in the Santa Barbara Showdown this weekend. The Gaucho 2018s tied Nor Cal Elite, defeated Factory High School 9-2, and lost to NinjaLax Elite 9-2 to finish Day 1 with a 1-1-1 record. Parrino (2 goals) and McKenney (1 goal) helped pace the offense while Ury’s physical play at LSM and close defense made life difficult for the opponents.

Orange County is also well represented on the Bunch Nation 2018 squad. Sophomores Hayden Rodenbeck (Servite),  Myles Smart (Foothill), Zach Williams (Servite) and  Jonathon Gibson (Tesoro) are playing key roles for the Bunch.  Smart had a succesful day at the faceoff x.  Gibson had two goals on the day and Williams scored one.  Rodenbeck showed off his versatility with the long pole by winning some faceoffs, scoring two goals, and playing shutdown D.  Following a couple of tough one-goal losses on Saturday, the Bunch 2018s will look to break in the win column today.  They lost to Bunch Nation 2016/2017 9-8, Factory High School 9-8, and NinjaLax Elite 7-2.