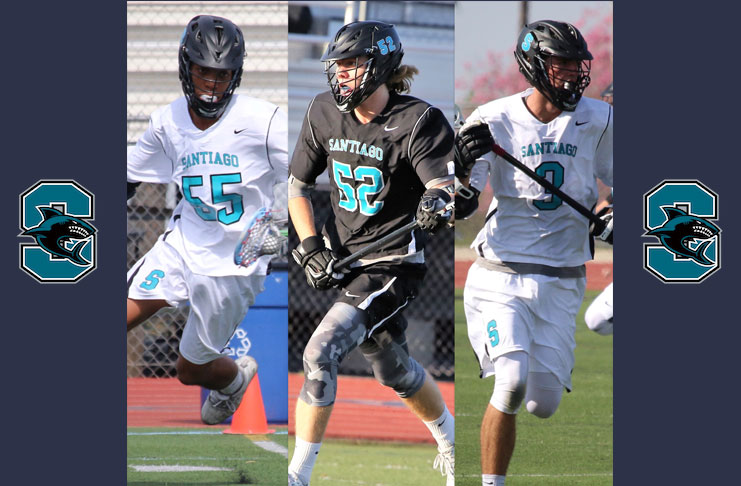 Santiago boys lacrosse coach Keith Parr announced that seniors James Beck and Bryce Parr and junior Ben Hamilton have been named captains of the 2017 Sharks.  The three captains helped lead the Sharks to the 2016 playoffs in the program’s first year of CIF play.
“I am very excited about our captains for our 2017 season,” coach Parr said by email.  “All three of these young men have worked hard on their game during the off-season and have earned the trust of their teammates. They each display different qualities that we know will bring success to our team as well as contribute to our goals of the team.  I am very honored to have these three young men represent the Santiago lacrosse program this season.”
Coach Parr said of each of his captains:
Parr (no. 52 above), a four-year starter and Santiago’s 2016 Defensive MVP, led the team in takeaways last season. Bryce is a fierce competitor, highly passionate, and a physical player and presence on the field.  He is one of our defensive leaders and has taken on an offensive role as well. Bryce has a very bright future ahead of him. He is committed to play lacrosse next year at Stevenson University, MD.

Beck (no. 55 above) is a returning captain.  He was Santiago’s 2015 & 2016 Team MVP and a four-year starter.  He has consistently been a leader on and off the field. Year after year, James has been one of the leaders in ground balls and takeaways. His athleticism allows him the opportunity to make plays both offensively and defensively. His field IQ and speed have been major contributors to the success of our team. We know he will be an impact player this season as always. He is committed to play lacrosse next year at Elmhurst College, IL.

Hamilton (no. 3 above) was Santiago’s 2016 Most Inspirational Player and is a three-year starter. He was the team leader in ground balls last season and came away with 75% success at the faceoffs at the X.  That winning percentage contributed to the team’s offensive success. Ben is a team leader on and off the field and has an incredible work ethic and positive attitude that inspires the rest of the team. He is a midfielder that works both sides of the field. We look for big things from him this year.