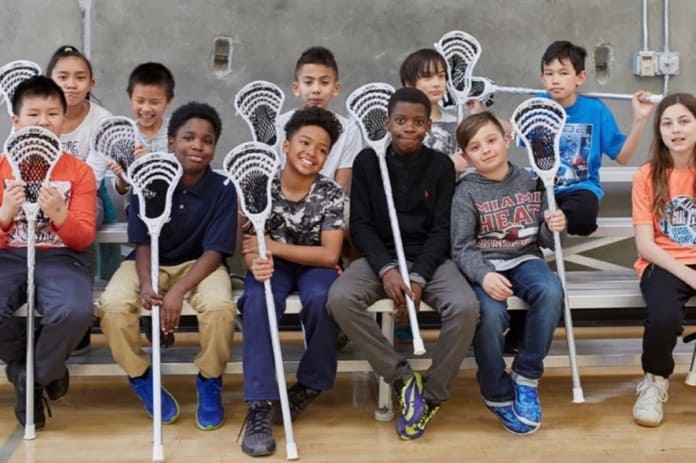 After his first lacrosse tournament, Kai Solomon had some questions.

“Where are the people of color? Everyone here is white,” Solomon, who is finishing his junior year at Santa Margarita, thought.

The question stuck with Solomon for years, and now he’s making a serious effort to diversify the sport he loves. As tens of thousands strive to end racism across the country, Solomon and his friends Henry Tarr and Cody Hart have teamed up to raise money for Harlem Lacrosse.

Harlem Lacrosse empowers children who are at risk for academic decline and dropout through lacrosse. The organization spans five cities, including Los Angeles, and 92 percent of its participants identify as African-American, Hispanic, or multi-racial.

“With all the social injustice and what’s going on right now, it really brought to light the issue and I wanted to do more than just post on social media and have a bigger impact,” Solomon said. “So I decided to make a campaign and Harlem lacrosse is a great organization.”

Solomon made his efforts bicoastal when he asked Tarr, who lives an hour outside of Philadelphia, to join him. Tarr just concluded his junior season of lacrosse at The Hotchkiss School in Connecticut and organized a sit-in protest on June 2, the day of Pennsylvania’s primary election, at his local polling place.

“I live in a predominantly white neighborhood or town in general,” said Tarr, whose mother is white and father is black. “I wanted to … publicly express my experiences with not necessarily racism but the underlying tones of racism and how it’s affecting me on a daily basis.”

Upon seeing his friend’s efforts, Solomon reached out to Tarr to broaden the reach of his fundraiser. Together, the pair raised $11,000 within three days of launching the GoFundMe campaign.

Originally, the goal was to raise $10,000. They have since upped the goal to $20,000 and will keep doing so as donations flood in. They hope to supply every participant in Harlem Lacrosse with a new lacrosse stick.

“I think it’s something that’s really spoken to people during this time and people in the lacrosse community have been passionate and given incredibly generous donations,” Solomon said. “Even people outside of the lacrosse community who just recognize this as an issue and want to help, a lot of people are just trying to take action right now with everything going on.”

The lack of diversity in lacrosse goes farther than what Solomon has seen at tournaments. On the NCAA Division 1 level, both men’s and women’s lacrosse lack diversity.

Although the sport has lopsided demographics, Tarr still calls lacrosse “basically the love of my life” and has reaped its benefits.

“The fact that lacrosse is a predominantly white sport, it opens doors in the future,” he said. “So colleges, most of the lacrosse colleges are esteemed institutions that hold weight in their name, which can really open doors down the road and that’s what really intrigues me outside of the physical aspect of the sport.”

Lacrosse has also enabled him to establish relationships with people of all races and share his perspective.

“With people who don’t have the experiences, seeing that it is a predominately white sport, I’m able to connect with people that I may not have been able to connect with,” he said. “I think that’s huge. The social networks that you create in lacrosse can help carry significant weight off the field.”

Solomon and Tarr are working to get an even bigger audience for their fundraiser. They’re circulating their campaign to Premier Lacrosse League players and fellow prep lacrosse players constantly.

The GoFundMe fundraiser can be found at https://www.gofundme.com/f/diversify-lacrosse-give-the-tools-of-the-game.

Raising money for Harlem Lacrosse is a small part of a huge change in adding diversity to the sport, and Solomon and Tarr are accepting all the help they can get.

“Sending out my campaigns or any of the campaigns is helpful,” Solomon said. “And having those difficult conversations with your friends and family is another big thing to try and shift the culture.”