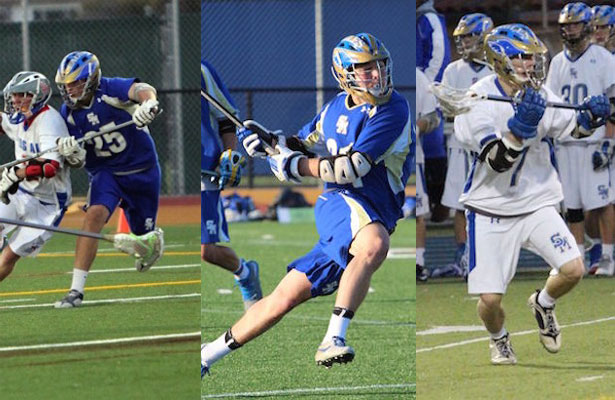 Visiting Santa Margarita Catholic High School improved to 3-0 with a hard fought 9-6 win over Huntington Beach. The Eagles jumped out to an early 2-0 but could not shake the Oilers in the early going. The game was tied at 2-2 and then again at 3-3 before Santa Margarita created some separation with a three goal spurt to head into halftime with a 6-3 lead. The Eagles continued to apply the pressure after halftime, extending their lead to 9-4 before HB tallied two late goals to reach the final score of 9-6.

Nico Houser (Wagner) ed the Eagles with 4 goals followed by Logan Dochterman and Zack Taylor with two each, and Andrew Kofoed with one.  Dochterman played an outstanding all around game, dishing out two assists and causing four turnovers.  On the defensive end of the field Eric Rubak (Bellarmine) and CJ Deal each forced three turnovers. Billy Senecal won 60% of his faceoffs to keep the possession arrow in Santa Margarita’s favor.

No. 6 Santa Margarita puts their perfect record on the line Friday night when they host No. 9 Tesoro led by Gunner Garn (Michigan) and Blake Warner.

No. 15 Huntington Beach looks to get into the win column when they host St. John’s of Texas on Saturday.