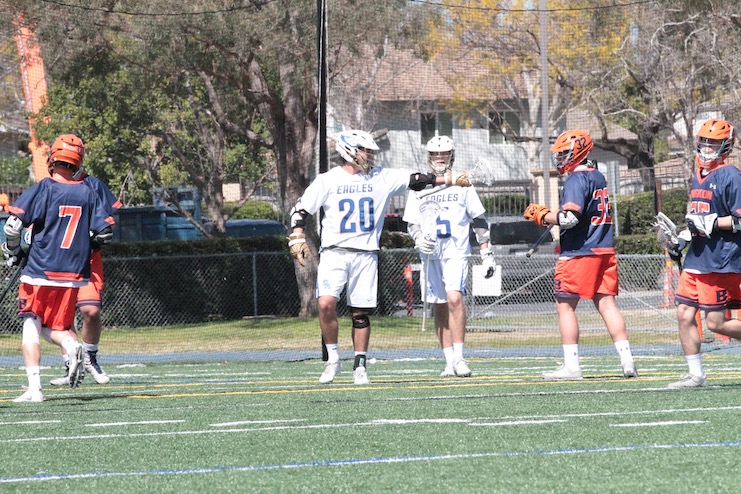 Senior Jack Fisher  found the back of the net five times on Saturday as Santa Margarita boys lacrosse handled Brighton (UT) 16-12.  Once again Chase Lynch controlled faceoffs, winning 22 of 30, to help the Eagles win the possession battle.  The victory over the defending Utah state champions gets the Eagles off to a 3-0 start.

Although the Bengals were the road team, the Eagles looked like the ones with jet lag to start the game. Brighton jumped out to an early 3-0 lead before the Nick Parrino-to-Fisher combination clicked to put the Eagles on the board. Then a Matt Ury takeaway put the Eagles in transition that led to a Robert Colley to Fisher goal and a 3-2 first quarter score.

A seven goal second period onslaught put the Eagles in control 10-5 at halftime. Freshman Tyler Wrightson scored the first of his two second-quarter goals to tie the game at 3-3 and ignite the rally. Then in quick succession Parrino, Michal Walsh, Fisher (twice),  Quentin Buchman, and Wrightson again all scored to give the Eagles the five-goal halftime lead. Fueling it all was an aggressive Eagles defense and Lynch’s dominating faceoff performance.

Third quarter goals from Buchman and Walsh made it 12-5 before Brighton scored again. The Bengals continued to press, getting as close as 13-10 at one point. However, the Eagles responded, and Fisher’s fifth goal, two from Jack Allender, and a fast break goal from Lynch closed out the scoring. Final score: 16-12 Eagles.