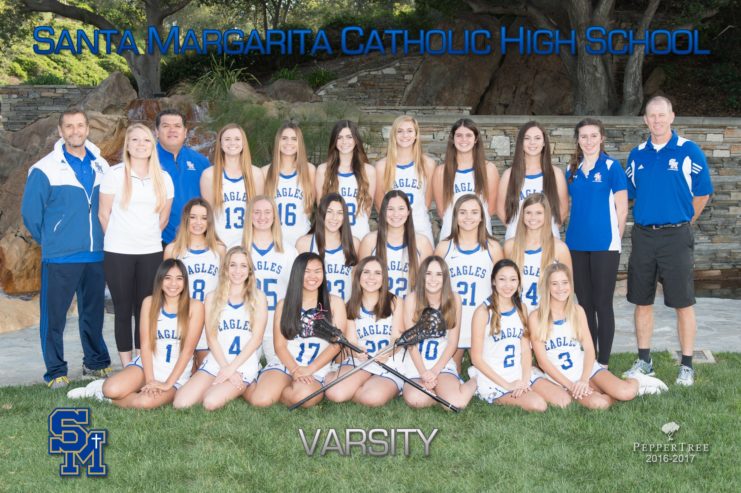 The Eagles (5-5) pushed their winning streak to three and halted Los Alamitos’ three-game winning streak in the process. The Griffins, which beat Oak Park (ranked No.3 in Los Angeles) 10-9 on Monday, kept it close against the host Eagles in the first half but were unable to pull off their second consecutive upset.

After the Griffins tied the game at 4-4 early in the first half thanks to a goal from Kyli Rael, the Eagles created some separation by scoring the next four goals. Two of those goals came from San Diego State commit Katelyn Murphy who finished the game with four goals. Los Alamitos got two goals from Riley Deutsch and Morgan Kalish to close the gap but found themselves down 8-6 at halftime.

“I think we came out strong. Santa Margarita had a good pace, they were a fast team,” Los Alamitos coach Sophie Aragon said. “I think my team stopped playing as a team. We started playing very individual and it hurt us in the long run.”

After the Griffins got to within 9-7 in the second half, things began to fall apart for them. The Eagles outscored Los Alamitos 5-1 to force Aragon to call a time out. During the time out, Aragon preached to her team to stop the Eagles’ momentum.

“The way I teach my defense is a team defense. We’re a defensive unit, and if we’re not playing as a unit, talented players like Erin [DiBernardo] or whoever will get those goals,” Aragon said.

From there, the Eagles eventually led by as many as 10 and never allowed Los Alamitos to get into a rhythm offensively. The Eagles got scoring contributions from Aidan Pike (three goals), Sidney Ruiz (two goals, two assists) Bella Martinez (one goal and one assist) and Maddie Bush (one goal, one assist). DiBernardo had three assists for the Eagles.   Goalie Victoria Hoffman made seven saves.

The Griffins were led by Kalish, Kennedi Cantrell and Victoria Hansen who scored two goals each. Rael, Deutsch and Daisy Haas each had one goal. Goalie McKenzie Shean had four saves.

Los Alamitos’ next game is Tuesday against Newport Harbor at Estancia High School at 6:30 p.m. Aragon and the Griffins know how much the Sailors (8-3) have improved.

“We just got to come back as a team. We’re a very solid team, but as soon as soon as we start playing indivually, it’s an issue,” Aragon said.

The Eagles’ next game is Friday against Kent Denver School of Cherry Hills Village, Colo. at Santa Barbara High School at 4 p.m.