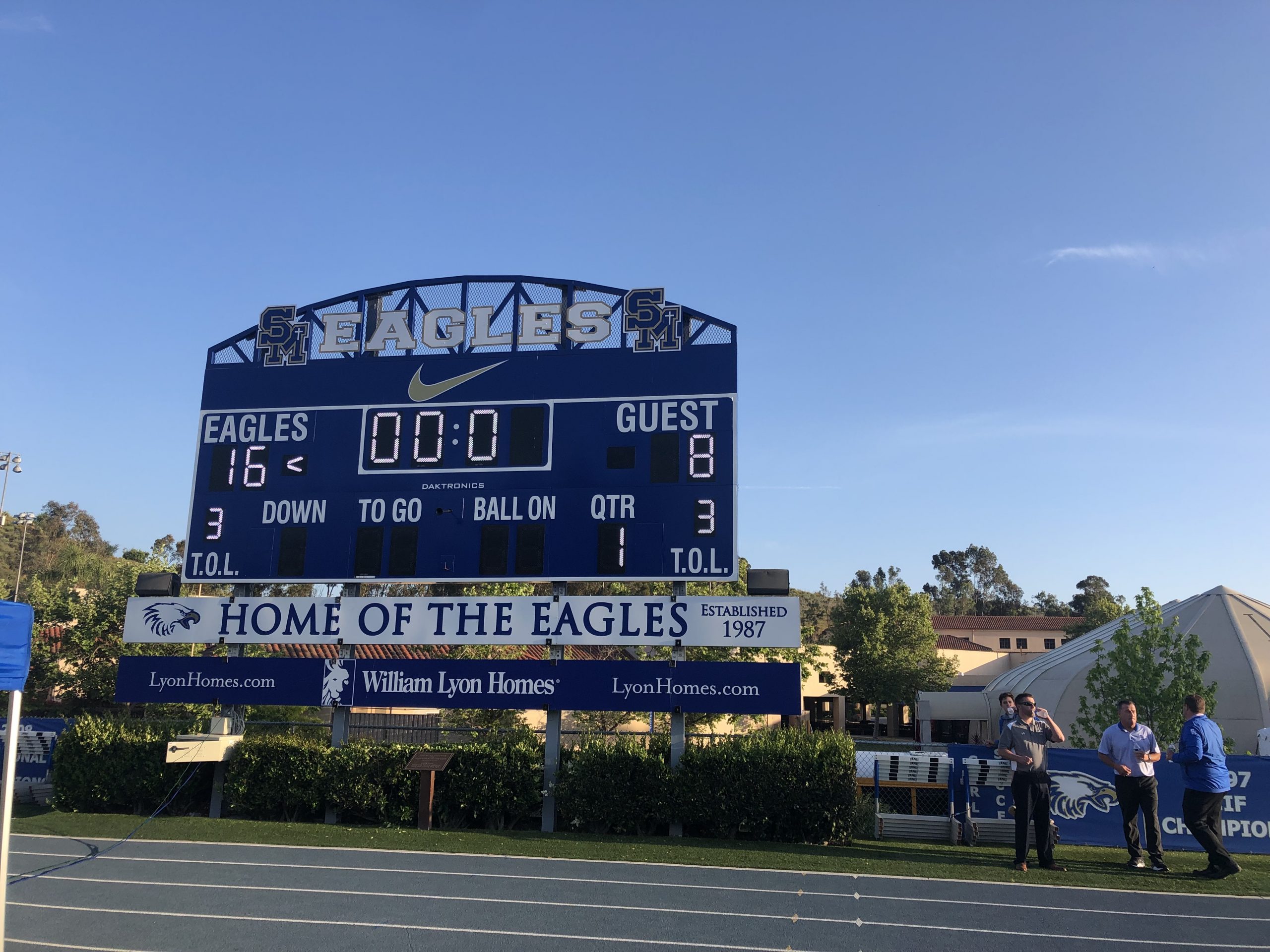 One year after watching a six-goal lead whither away in a controversial second round game against Trabuco Hills, the no. 4 Santa Margarita girls lacrosse team left no room for error, and defeated their old nemesis 16-8 to advance to the semi-finals of the OC/IE championship tournament.  The Eagles will face no. 1 Foothill at 11 am on Saturday at Segerstrom High School.

There were many Santa Margarita stars in this game but none shone brighter than freshman goalie Brogan Webster. Webster frustrated repeated comeback attempts by the dogged Mustangs with point blank and free position saves.

“My goalie had a phenomenal game,” said coach Katie McHugh. “She had 12 saves which is just unbelievable.”

After losing to Trabuco in May last year and then again in March this season, this game carried a lot of emotion for the Eagles and McHugh felt that emotion helped fuel her team.

“I think it was our fight,” said McHugh when asked about the keys to the win. “Honestly, we saw this game earlier in the season and we didn’t play to our ability.  That fueled us for this game. They (Trabuco Hills) ended this team’s season’s last year and again that just brings back emotions and we were ready to come out today.”

Ready to come out they were.  Molly Jacobson, Caylee Harrison, and Jessica Parker wasted no time in putting the first three points on the board. The Eagles dominated possession throughout the first half and added goals from Jacobson, Harrison, and captain Katelyn Murphy before Morgan Yee broke the ice for the Mustangs to make it 6-1.

Murphy seemed ready to end the game early by scoring the next three but Kiana Callahan showed it would not be that easy with a late goal to leave the Mustangs trailing 9-2 at halftime.

Hennessy Evans added another one for the Mustangs to make it 9-3 on the opening draw of the second half. And when the Mustangs got another scoring opportunity on a free position about a minute later, the Trabuco Hills faithful started to come to life.  However, Webster came up with one of her saves and the  ensuing clear resulted in a long possession, Murphy’s fifth straight goal, and a 10-3 lead with 20 minutes to play.

That lead would grow to 12-3 but still the Mustangs would not go away.  They made their final comeback attempt with three unanswered goals with in less than a minute and a half starting at about the 5:30 mark that left them in a similar position to last year – down by six late in the game and clawing their way back in.

However, the Eagles collectively channeled their best Arya Stark, said not today to the god of defeat, and put four more points on the board to seal the 16-8 victory and punch their ticket Saturday’s semi-final.