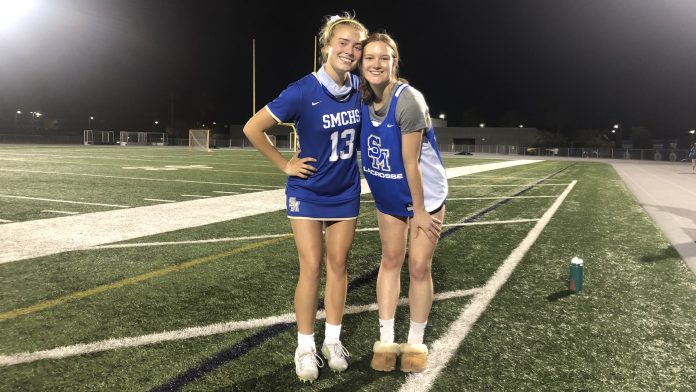 Molly Jacobson (pictured left) led the Eagles with four goals while Jessica Parker added two goals. Defensively, Brogan Webster (pictured right) made six saves, with four of them coming in the second half.

“I think the energy was great with our team. They stayed tough throughout the whole ups and downs and mistakes that we made. They [Newport Harbor] obviously had a great team. Their program is good, they’re competitive and were hanging side-by-side with us the entire game,” Eagles coach Katie McHugh said.

Santa Margarita never trailed, but wasn’t able to pull away until the second half. The Eagles led 3-1 with 11:15 in the first half, when the Sailors scored two straight goals from Joelle Rothbard and Rowdy Farmer tying the game at 3-3.

Santa Margarita didn’t get another goal for almost eight minutes until Brooke Cressy cut open and scored off of a pass from Ava Freeborn to regain the lead at 4-3. Newport Harbor almost tied the game at the end of the half, but a Webster save on a free position shot kept the score at 4-3 going into halftime.

A big momentum shift occurred in the second for the Eagles as the Sailors stole the ball, but instead it was Kaeli Whitman who regained control of the ball and scored to put the Eagles up 5-3. The goal proved to galvanize Santa Margarita, as it rattled off an additional four goals to make the lead 9-3 at the 15 minute mark, forcing a Newport Harbor time out.

During the first 10 minutes of the second half, the Eagles won draw controls, controlled possession and did everything it took to prevent Newport Harbor from getting a glimmer of a chance of having the ball.

“They came out hungry and ready to win. They’re taking advantage of when we had the ball and when we possessed, we were able to capitalize on those possessions,” McHugh said of her team.

The Sailors stepped up defensive pressure in the final to minutes of the game, holding the Eagles scoreless during that stretch. However, the Eagles had built up a 10-4 lead by that point and the Sailors’ efforts were too little too late. Despite scoring the final three goals of the game, Newport Harbor fell 10-7

A timely Webster save on a free position shot at the 2:05 mark helped stem the Newport Harbor comeback attempt and clinch the game for the Eagles.

Whitman, Freeborn, Cressy and Caroline Sanders each found of the back of the net once for Santa Margarita. McHugh was please with how her team had six different goal scorers.

“Having six different scorers out there with seven attacking threats is a game changer for us as well. We’re excited to keep surprising people throughout the season,” McHugh said.

“I think for us it came down to groundballs and not chasing shots. I think our defense looked really really strong compared to the past couple games and right now, we just have to continue to build our offense,” Sailors coach Brooke Martini said.

Martini shuffled her lineup, moving primary goalie Willa Rath on defense, while starting the sophomore Valdes in the cage.

“Lucy came out strong, she was stoked to get in the game and she’s been working really hard in practice. She’s just going to continue to be an even better goalie as we get more practice in,” Martini said.