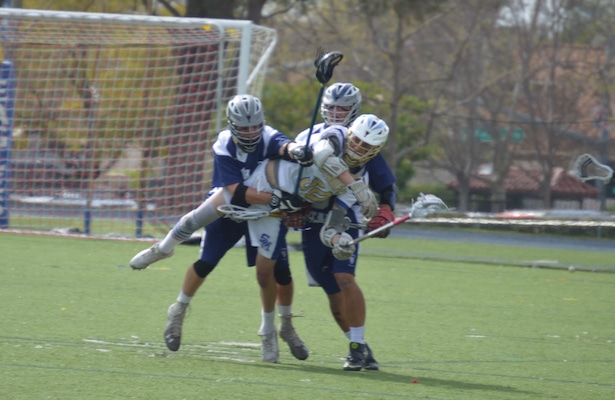 The #6 ranked Trabuco Hills Mustangs opened their 2016 season with a match up against the #4 ranked Santa Margarita Eagles on Saturday. The Eagles were coming off a season opening win against El Toro.  Santa Margarita, led by junior Shane Cobb’s four-point performance (3 goals, 1 assist), came away with  an exciting 11-10 victory that went down to the wire.

Santa Margarita showed up ready to play, and took advantage of Chase Lynch’s domination at the faceoff X (17 of 21 for the game) to  jump out to an early 3-0 lead  (Jack Fisher from Zach Taylor, Cobb, and Logan Dochterman).  Billy Barron (Sonoma State) put the Mustangs on the board when capitalized on a rebound from a  Harrison Evans (Colorado Mesa). Lynch continued to get the Eagles possessions,  and the Eagles responded with two more quick goals from Jack Allender (assist Quentin Buchman) and Lynch off the face off.  With his team down 5-1,  Trabuco Hills Coach Eric Bassett called a timeout to stop SM’s momentum. The first quarter ended with SM controlling the momentum and the scoreboard at 5-2.

The second quarter began where it left off with Cobb building the Santa Margarita lead to 6-2 off and  an assist from Buchman.  Buchman then scored one of his own to make it 7-2.  The Mustangs began to shake off the first game jitter, answered with back to back goals from the Kauo brothers. John Kauo scored on an unassisted dodge from the right and sophomore Jason Kauo finished in the crease off of a beautiful pass from behind the net from Barron. The Eagles, added two more goals to close out a commanding first half at 8-4.

The halftime buzzer came at a perfect time for the Mustangs, who needed to regroup. Coming out of the half, Trabuco Hills won some timely face offs and caused some turnovers to change the momentum in a hurry. Evans cut to the net and finished off a nice take away and assist from Barron. Evans capped off his hat trick with a spectacular individual effort and multiple dodges after a face off win by Jake Lansner to bring the score to 8-6.

Trabuco Hills’ new found success at the face off X led to another offensive possession, however the Mustangs were not able to capitalize. LSM Scott Barger (Towson University) brought the Trabuco Hills fans to their feet with the play of the game when he made a blind over-the-shoulder take away of an attempted Santa Margarita clear. Trabuco Hills capitalized on the turnover when Barron scored on an unassisted blast from the left side. Barron’s goal brought Trabuco Hills within a goal at 7-8. Trabuco Hills evened the score at 8-8 when Evans sent a bounce shot off the cross bar and into the back of the net on an assist from Barron. The momentum shifted to Trabuco Hills and forced SM Coach Adam Guy to call a time out.

The Eagles answered with two quick goals to go up 10-8. Evans and his younger brother freshman Holden Evans added two goals to tie the game with less than 3 minutes remaining. The teams traded possessions until Santa Margarita scored the game winning goal with less than a minute in regulation. Trabuco Hills returns to action for their home opener on Thursday, March 10th vs Servite High School.