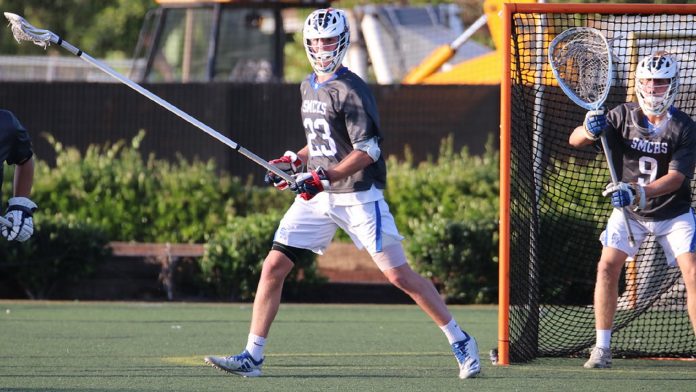 The Eagles jumped out to a 3-1 lead at the end of the first quarter with goals from Ethan Messer, Marcus Lansing and Lincoln Dodd. Servite’s defense led by Nick Sheremetta and Bryton Hickok turned the tide in the second quarter and changed the momentum for the Friars.

The Friars collected goals from James Prado and Ethan Scaffidi before Dodd added his second goal. Evan Watanabe scored for Servite to tie the game 5-5 with 1:30 to go before halftime.

Kai Solomon had two caused turnovers for Santa Margarita and Colin Hebble (pictured) led the way defensively with eight groundballs and one assist on the night. Scaffidi and Charlie Horvath of Santa Margarita both scored in a relatively quiet offensive third quarter, as both teams set the stage for a dramatic fourth quarter to determine second place in the Trinity League.

The fourth quarter proved to be just as dramatic and evenly matched as the three before it. Watanabe opened the scoring with his second goal, followed less than a minute later by an answer from Horvath.

Watanabe completed his hat trick with 10 minutes to go, for what proved to be Servite’s final lead at 7-6. Max Roop tied the game off an assist from Dodd at the 4:19 mark and less than a minute later, Trevor Pajak scored the eventual game winner with 3:55 left in the game.

Eagles coach Ryan Brent also credited his defensive unit of Cole McKechnie and goalie Ryan Rodas for their contributions and leadership. Rodas came up with a huge save in the final minute of the game to seal the 8-7 win for the Eagles.

Santa Margarita (11-5, 8-2 in league) completes its regular season schedule on Saturday when they host Beckman at noon. Servite (10-9, 6-4 in league) will shift its focus on the postseason when the CIF-SS Division 1 brackets come out on Saturday at 11 a.m.