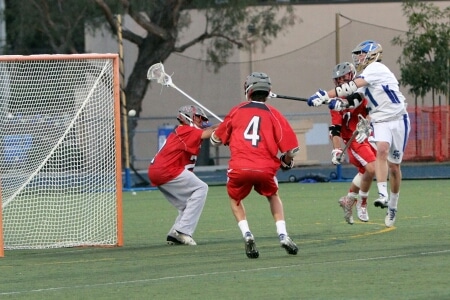 Santa Margarita Catholic High School came out on top 11-4 in a Tuesday night duel between two of this year’s most improved lacrosse teams.  The Eagles entered the game with with a 6-2 record, just one win shy of their 2013 total, while navigating through a schedule that laxpower.com ranks as the 12th most difficult in the CIF Southern Section.  Mater Dei’s turnaround has been no less impressive.  They started the game with an 8-1 record, on the verge of tripling their 2013 total of three wins.

Taking their cue from a defense that was making it difficult for Santa Margarita to get into a rhythm, the Monarchs controlled the pace early.  Jack Southron (3 goals) scored early in the first quarter for Mater Dei, and Nico Houser (1 goal) answered late to make it 1-1 after the first 12 minutes.    Southron got his second goal of the game early in the second and it looked like this game was going down to the wire.  That was not going to be the case on this night though.  It took Hayden Ruiz (1 goal, 2 assists) less than a minute to find an open Andrew Kofoed who not only tied the game but ignited a 10 goal run by the Eagles that put the game out of reach.   Doc Dochterman’s hat trick powered the surge.  Konnor Bremer, Zach Taylor, Michael Senecal, Billy Senecal, and Greg Yosenick all figured in the scoring with one goal apiece.  Southron’s final goal and a nice piece of work from Jake Stanford off the faceoff completed the Mater Dei scoring.

Things won’t get any easier for Mater Dei (8-2) when they face JSerra tonight.  The Eagles take their own 7-2 record to Servite today.

1. Doc Dochterman:  Hats off to the super soph for his hat trick.  On a night when Ruiz did not have is offensive juices flowing, Doc picked up the slack, and even added a lefty wormburner to his repertoire, check out the video!

2. Nico Houser: The junior’s only goal of the night was a game changer.  With the Mater Dei D not giving anything away any shots in the first quarter, Houser decided it was time to create one. Starting up high, the hard right dodge wasn’t working for him. So Houser wrapped around behind the cage and then curled back to break down the D and put the Eagles on the board.  Check out the video!

3. Jack Southron.  I don’t think any one player in the area means more to his team than Southron does to the Monarchs.  He is a one-man wrecking crew. You guessed it, check out the video!