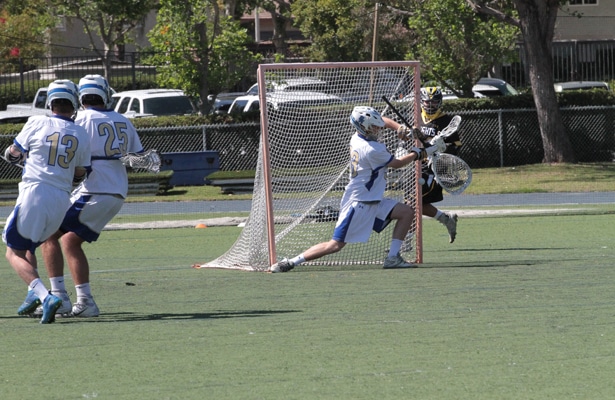 No. 4 Santa Margarita goalie Mike Gately came up with  12 saves, to lead the Eagles to a 15-8 win over No. 12 JSerra.  The Eagles ended their regular season on a high note, finishing their regular season with a 13-5 overall record and 6-0 Trinity League campaign.  The Lions have two challenges left, Loyola (No. 2 in Los Angeles) on Tuesday and No. 13 Servite on Thursday.  The Servite game could decide which team gets a third bite of the Santa Margarita apple in the opening round of the playoffs.

Despite a quick goal from Santa Margarita’s Jack Fisher (2g) to open the game. Early on this one had upset written all over it.  Austin “Shack” Shackelford controlled faceoffs throughout the game (14/19, 79%) and the Lions were able to take advantage in the first quarter.  Powered by goals from Logan Carroll (2g), Vincent Cifarelli (2g),  Lance Brock (1g) and Matt Karzak (2g), JSerra jumped out to a 4-2 lead by early in the second quarter.

With Gately staying hot between the pipes to prevent JSerra from getting too far ahead, the momentum switched at about the four minute mark of the second quarter when Fisher scored his second goal. Fisher’s goal ignited a Santa Margarita scoring barrage that resulted in five more Santa Margarita goals by halftime – three by Quentin Buchman  (6g, 1a) and one apiece from Dochterman (4g) and Shane Cobb (2g) – to take control of the game.  The Lions were only able to respond with a goal from Hunter Neal (1g) to make it 8-5 at halftime.

The Eagles continued to dominate in the second half and stretched the lead to 10-5 with Cobb and Buchman tallying for Santa Margarita and Karzak scoring his second for JSerra.  The Eagles put the game out of reach in the fourth with two goals from Buchman, two from Doc, and one from Michael Walsh to make it 15-6. Late goals from Cifarelli and Carroll brought the final score to 15-8.