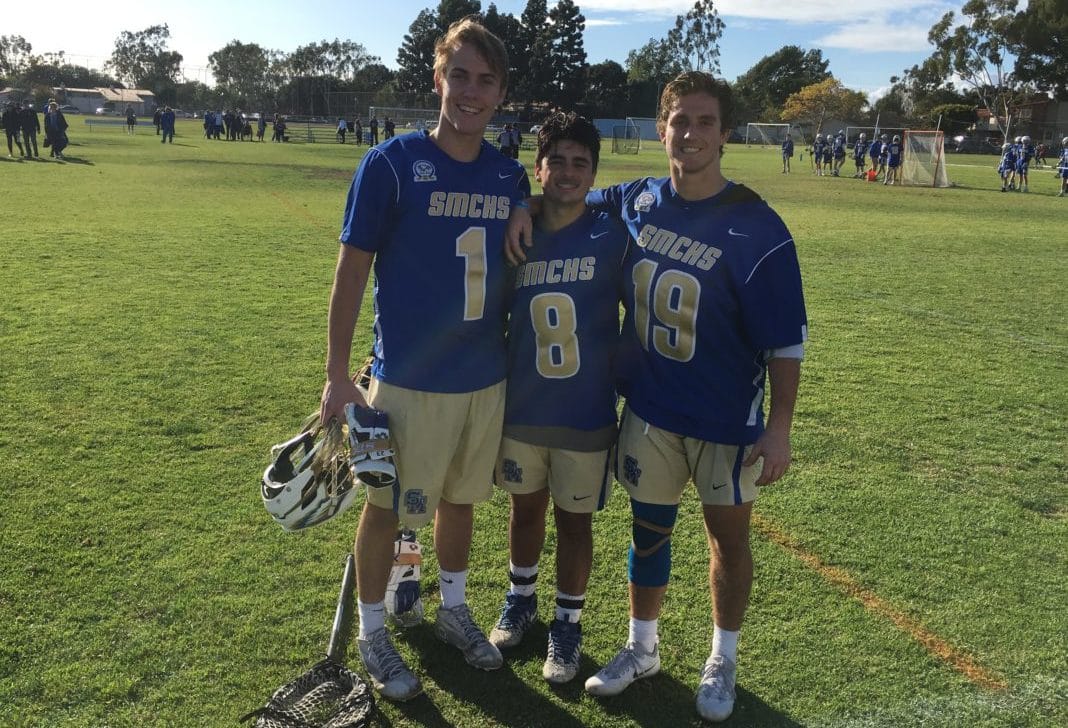 The Santa Margarita boys lacrosse team came up with a couple of firsts on Wednesday afternoon at Corona del Mar High School.  Not only did they defeat the Sea Kings for the first time in program history, they were also the first boys’ lacrosse team from Orange County to beat Corona Del Mar on its home field since 2007. The Eagles accomplishments came in dramatic fashion, as they beat the Sea Kings 7-6 that went down to the final ticks of the clock.

Quentin Buchman and Nicholas Parrino led the Eagles with two goals apiece, with Buchman notching a goal late in the fourth quarter. Ryan You, Tyler Wrightson, and Ryan Ross scored one goal apiece for the Eagles, who got three assists from Jack Alexander and nine saves from Ryan Olsker.

“You could hear a pin drop on the bus ride home from Tesoro. After the game, the captains and the seniors got together with the team and came together and all made a decision, it’s either all or nothing. That game was very humbling for everybody, myself included, and I’m very happy to see we can bounce back like that,” Guy said.

After the Eagles gave up the first two goals of the game, they responded with two goals of their own to tie the game at 2-2. The Sea Kings took back the lead at the 2:32 mark of the first quarter by scoring two straight.

After the Sea Kings scored those two goals, they were held scoreless for 26 minutes and didn’t score until there were 31 seconds in the third quarter. By that time, CdM was down 6-5 heading into the fourth quarter.

Neither team found the back of the net for most of the fourth quarter until Buchman scored for the Eagles, giving them a 7-5 lead with 2:34 left in regulation. The Sea Kings didn’t give up, as Eric Fries scored his third goal of the game to pull the Sea Kings to within 7-6 with 1:17 remaining.

On the ensuing faceoff, the Sea Kings won it and coach G.W. Mix called timeout to draw up a play, looking to tie the game. The Sea Kings got off two decent looks at the net, but both were saved by Olsker. The Eagles regained possession after the second save and ran down the clock to seal the victory.

“I don’t think we did a good enough job offensively, we turned the ball over quite a few times. They [Santa Margarita] did a really nice job. They earned that one for sure,” Mix said.

Up next for the Eagles (3-1), a road game against Palos Verdes on Friday at 3:30 p.m. For the Sea Kings (3-2), they play Foothill at Tustin High on Saturday in a rematch of last year’s County final at 7 p.m.