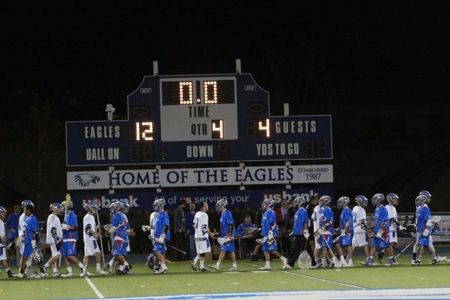 The Santa Margarita Catholic High School Eagles fought through a strong first half performance from a determined and upset-minded Los Alamitos squad, and pulled away in the second half for a 12-4 victory. The Griffins, led by a solid team defense, headed into the locker room at halftime with a 3-3 tie and visions of an upset. However, the SM offense came well prepared and was able to pick apart the offense more and more as the game went on.  The Eagles went on to outscore the Griffins 9-1 to walk away with the win, and a berth in the quarterfinals.

The Eagles were led by two sophomores, Zach Taylor at the offensive end and Eric Ruback at the defensive end. Taylor had a breakout game with 6 goals. Hayden Ruiz had another ho-hum 5-point night with 1 goal (hint: watch Top Ten Plays next week) and 4 assists. Andrew Kofoed (2 goals, 1 assist), Logan Dochterman (1 assist), Chris Angelich (1 goal), and Nico Houser (1 goal, 1 assist) completed the Santa Margarita scoring.  At the defensive end, the Los Al offense struggled under the wrath of SM’s high pressure defense with enforcer Rubak inflicting most of the damage. Ruback and friends gave goalkeepers Max Vought and Aidan Rubidoux plenty of time to rest up for the semi-finals by limiting Los Al to just 9 shots on goal.

The Eagles will travel to San Clemente on Thursday to determine which team will move on to the Southern Division semi-finals. The two have not played each other since San Clemente completed a late comeback in overtime of the 2012 semi-finals to beat the Eagles.