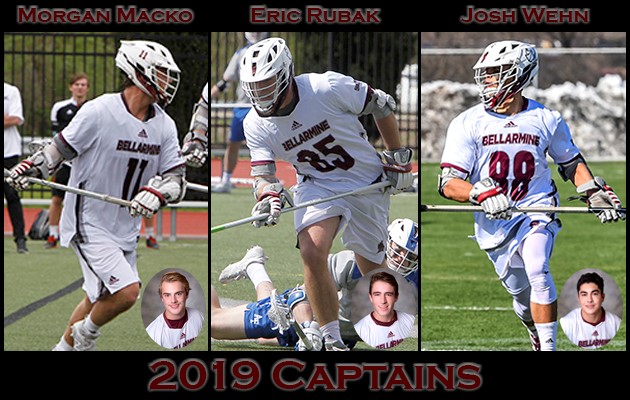 Eric Rubak (Santa Margarita ’16) was named a captain of the 2019 Bellarmine University men’s lacrosse team. Rubak will team up with fellow tri-captains Josh Wehn (Cathederal Catholic ’15) and Morgan Macko to lead the Knights in 2019.

Rubak is Bellarmine’s top returning defender.  He played in all 13 games for the Knights last season. He led the team with 15 caused turnovers and picked up 21 groundballs. Rubak also contributed offensively, notching a pair of goals and handing out an assist.

The press release from Bellarmine is presented below.

“I’m looking forward to seeing these three take on elevated leadership roles this season,” Mitchell said. “They are strong role models for our program, because they do things the right way…both on the field and in the classroom. Eric, Morgan and Josh are respected by their peers and represent the standard of what it means to play lacrosse here at Bellarmine.”

Wehn is a defenseman from Del Mar, California.  Last season, Wehn finished third on the team in both ground balls and caused turnovers. He also managed to get involved in the Bellarmine offense, firing six shots and scoring twice while also delivering two assists.  An exercise science major, Wehn was selected to the Southern Conference Honor Roll last season.

Macko is one of Bellarmine’s top returning attackmen. Last season, the Orchard Lake, Michigan native was second on the team in goals (15), assists (10), and points (25). Macko also had a strong freshman campaign with 13 goals and a shot-on-goal percentage of 78.3. Also accomplished in the classroom, Macko—a finance major—is a two-time Southern Conference Honor Roll honoree and was named Academic All-Southern Conference last season.

Rubak also is defenseman from California, and the Rancho Santa Margarita native is Bellarmine’s top returning defender.  Last season he scooped up 21 ground balls and led the team with 15 caused turnovers. Rubak also contributed offensively, notching a pair of goals and handing out an assist.

Bellarmine opens the 2019 regular season with a home contest against Wagner on Feb. 2 at 1 p.m.

Congrats to 2016 alum Eric Rubak on being elevated to Captain for ⁦@BellarmineLax⁩ Tremendous talent and a natural leader, way to go! https://t.co/zmlJ7CS4zl