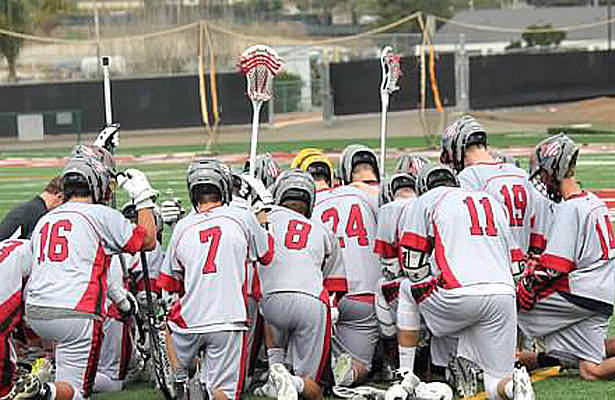 Hundreds of fans gathered to watch a seesaw battle between two potent offenses Tuesday. But it would take a stubborn defense and some tremendous saves for the Santa Fe Christian Eagles to beat the Falcons 9-8 in the San Diego Section Division I boys lacrosse semifinals.

At the faceoff X, the battle raged between Casey Wu of Scripps and junior Hank Ontiveros of SFC, with neither team gaining clear advantage in the first quarter. But three wins from Ontiveros in the second quarter and back-to-back goals by Eagles seniors David Divjak, RJ Walker and Chad Clerke made a statement.

And just for punctuation, Eagles junior defender Jeff Linguadoca went the length of the field for the slam dunk.

But in the third quarter, Scripps Ranch possessed the ball for most of the first eight minutes and scored three consecutive goals thanks to sophomore Joey Tudor and Zack Gillette, tying the game at 6-6.

Despite the Falcons onslaught, Eagles goalie Grant Koopman made several highlight reel saves, while Eagles middie Garrett Lipscomb made some huge clears, weaving and pounding his way down the field.

The Eagles regained the lead on a goal from Lipscomb, then extended it on two more Divjak, and the defense held on.