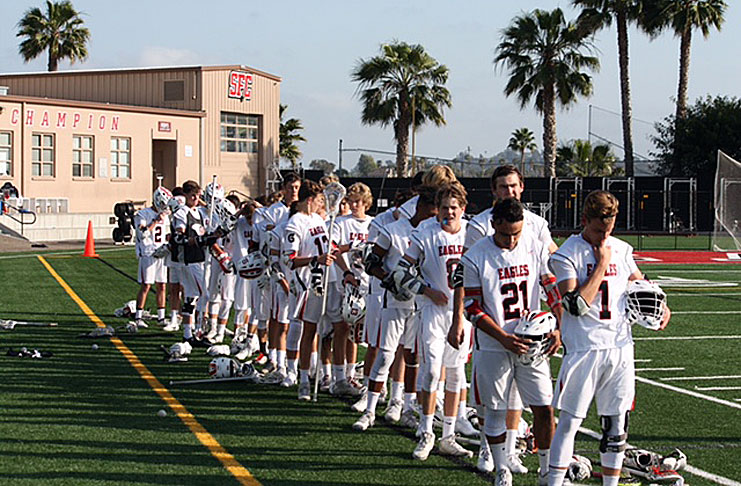 Santa Fe Christian, the defending CIF Division I champion, won its 11th consecutive game last week, clinching the Coastal League championship, and is looking to make a run in the Open Division playoffs this season.

After a 1-2 start to the season, with losses to Cathedral Catholic and Westview, the Eagles (12-2, 4-0) have strung together 11 wins in a row, including Thursday’s 10-8 win at Bishop’s. SFC is currently ranked 7th in San Diego according to LaxPower.com.

Thursday, the Eagles jumped out to a 6-1 lead at Bishop’s and never looked back, winning 10-8. That win put SFC two games ahead of the Knights in the league standings and three games ahead of La Jolla Country Day and Pacific Ridge with two games to play.

Thursday’s win was a contrast to the Eagles’ first win over Bishop’s. That one required faith, toughness and perseverance to pull out a thrilling, come-from-behind victory late in the game. Freshman Preston Graubart sealed the win with just three seconds to play.

The Eagles have relied all season on their veteran defense and impeccable face-off play. Led by junior goaltender and captain Grant Koopman (8 saves per game), Santa Fe Christian’s defense has allowed an average of only 5.7 goals per game this season. Senior captains Reece Walker and Jeff Linguadoca, along with junior Christian Stallworth (University of Detroit) have been the driving forces behind the Eagles’ defense.

Senior captain Hank Ontiveros (Wagner College) has dominated the face-off X, winning 65 percent on the season and giving the Eagles possessions at crucial points. Although the Eagles boast six offensive players with double-digit points, Ontiveros leads the way as the team’s catalyst and leading scorer with 64 points.

Head Coach Tom DeMaio, in his fourth year at Santa Fe Christian, has been able to maximize the strengths of his team while minimizing its weaknesses. Coach DeMaio emphasizes a disciplined team approach above all else, which is exemplified through the team’s average penalty minutes (1.2 per game) and time of possession.

“We do a good job really knowing ourselves and what we are capable of in a given situation,” DeMaio said. “We know as a smaller school we have to limit mistakes and make the most of opportunities, and this year we have done a very good job of that.”

Exemplifying the team’s discipline and resolve is Santa Fe’s record in close games. This year, the Eagles are 7-1 in one-goal games over the last two seasons, including 3-1 this year.

The Eagles look to keep their winning streak and undefeated league record rolling against Pacific Ridge on Thursday, then in a nonleague home games against St. Augustine on Tuesday and the league- and regular-season finale at home against La Jolla Country Day on May 4.