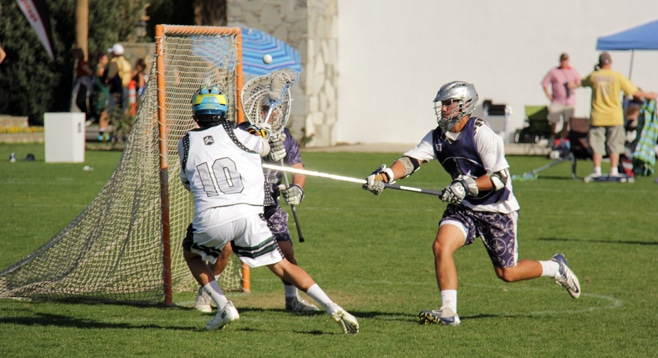 Sandstorm is a tournament unlike any other in the West. With 40 fields spanning longer than a mile diagonally, the energy is rampant and the scope of audience each team is playing for is ever-present. Saturday kicked off the last big preseason tournament as teams from all over Orange County siezed the opportunity to prepare the season.

The Kings (not to be confused with Adrenaline’s OC Kings) brought a team entirely composed of CdM High School players and it showed throughout the weekend. Coach G.W. Mix’s squad had unparalleled chemistry as they played to their potential all weekend.

Early in the first half the King’s found themselves in the hole 3-1 after letting up a few sloppy goals. This trend would be broken as the guys from CdM woke up in the second half. Although Jason Simaan (CdM) won the majority of face-offs in the first half (as we’ve come to expect of late), Donny’s did a good job of jamming the wings and stalling any facebreak opportunities. The first face-off of the second half was won by Simaan and taken down to Donny’s defensive zone where Grant Wallace (CdM) finished his play that started at the faceoff X for a goal to bring the Kings within one.

After a few massive hacks by a frustrated Donny’s defense, Jordan Greenhall (CdM) drew two penalties, proceeded to break off the double team and find Ryan Brown (CdM) back cutting his defender to tie the game 3-3. Goalie Hoyt Crance (CdM) came up huge on the ensuing possession as one of Donny’s poles creates his own fast break, feeding a Donny attackman who was stuffed one on one by Hoyt’s foot. On the ensuing clear, the Kings lost the ball and the same Donny attackman tries for revenge but the again stuffed on the doorstep by Hoyt.

The Kings took the lead when Max Kline (CdM) checked a defender clearing across the crease and picked up the loose ball to finish, lifting Cdm to a 4-3 lead. Hoyt would keep the lead intact for the last six of eight minutes left in the game as he makes three saves in a row. Logan Miller (CdM) took care of the last goal by stutter stepping his defender right above GLE to finish top shelf for the  5-3 Kings win.

A close game between two equally matched teams that was be cut short by an unfortunate injury. A Foothill team plagued by the Winter Formal bug fought hard to stay in the game despite being shorthanded.

Nate Marano (Foothill) kicked off the first half with a goal but the lead would be short lived. Coronado scored two in a row to go up 2-1 and intense pressure between the lines would keep it that way until the last five minutes of the first half. Nick Matzek found the back of the net to tie the game 2-2, then the teams exchanged goals to end the half in a 3-3 tie thanks to Marano’s second goal of the game. An unlucky fast break would give Coronado the lead and an injured player.

A seemingly clean looking hit landed a Coronado player in a scary position. The trainers were rushed over to tend to a still, but breathing, Cougar. From what it looked like from the sideline the hit landed the player awkwardly on the ground knocking him out cold. There was no movement for an unnerving amount of time but as the player was carted off the field there was motion and he appeared to be ok. This ended the game and Crush was dealt their first loss of the tournament.

Check out this awesome view of Sandstorm from 150 feet up!