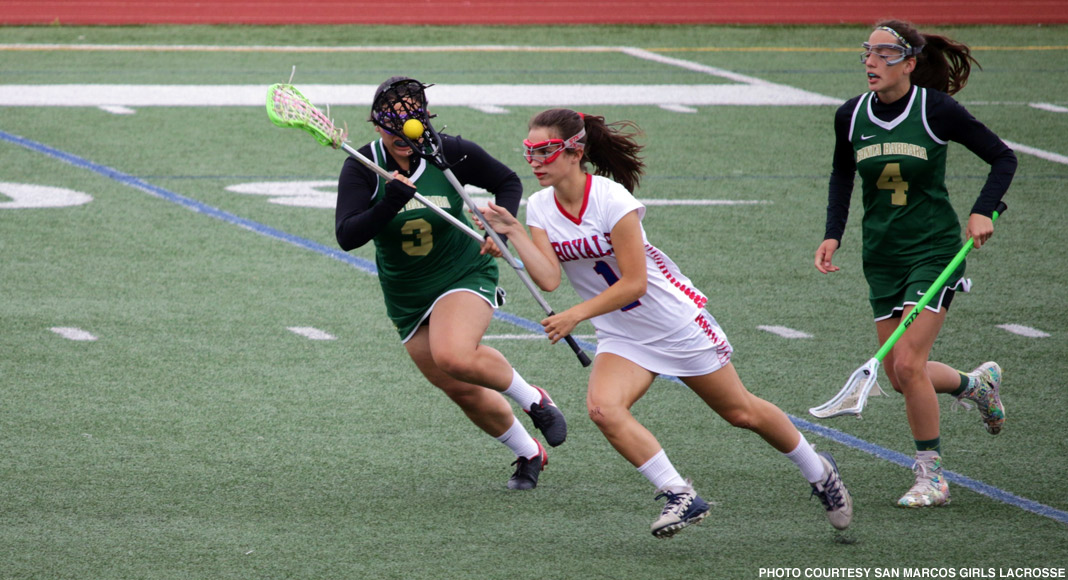 Leading 6-4 with less than 10 minutes to play in the first half Friday, a quartet of San Marcos seniors took control, sparking a 4-0 run that produced a 10-4 halftime lead and ultimately led to 19-9 win over visiting Santa Barbara.

Senior Catherine McQueen started things with an unassisted goal, and a minute later senior Emily Martin dodged and found senior Emma Beiffus open inside for an 8-4 lead and some breathing room. Then senior Demi Robitaille took command and buried two straight opportunities to put the Royals up 10-4 at halftime.

In the second half, McQueen made a highlight-worthy play that charged up her team. On a dodge from behind the goal, McQueen made it to the front of the cage but was double-teamed. She looked stymied until she let fly a behind-the-back shot that slipped over the goalie’s right shoulder and electrified the team and the crowd.

San Marcos (5-10) rode that emotion, outscoring Santa Barbara 7-4 the rest of the way.

“The creativity from Cat to pull that off in that situation, when that was her only angle for a shot, and it so was the right time to do it, makes me so happy,” San Marcos coach Paul Ramsey said.

Ramsey said he had added the BTB to stick-work drills in practice this week, just to lighten everything up and get some variety and more smiles. He didn’t expect anything more of it than that but wanted to get the girls working on developing a skill that has become a staple of the game.

“The BTB has become part of the game the last few years, and it’s not just a backyard stick trick anymore,” he said. “It is part of the game at higher levels, and now it’s part of San Marcos girls lacrosse too.”