San Marcos Rolls On with 11-4 Victory at Royal 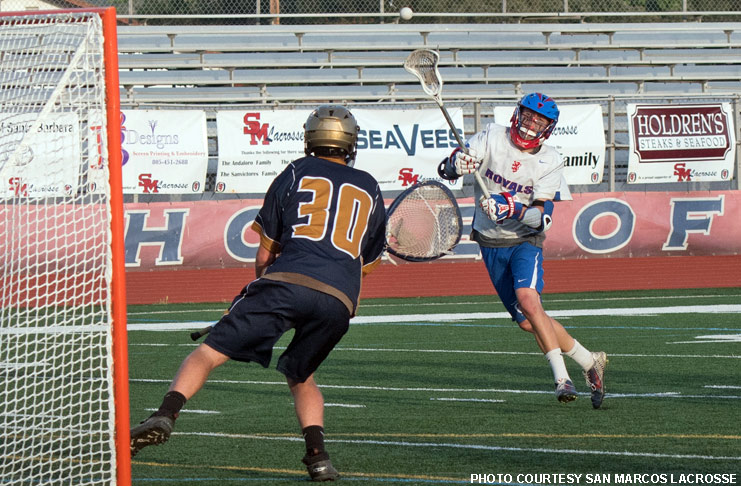 No. 18 San Marcos improved its overall record to 10-1 on the season Thursday, posting a decisive 11-4 road win over the Royal Highlanders.

Isaac Oh and Shea Rousseau were outstanding at the face-off dot, keeping the ball in the hands of the Royals’ scorers. Josh Blanchard shined offensively, scoring three goals, and Justin Lehman continued to dominate with five goals and two assists. Trey Tank scored two goals and had two assists.

Coach Rick Lehman said he was proud of the whole team, with the entire bench playing and contributing to the team win. Defensive midfielders Patrick Regan and Joseph Panossian helped slow the Highlanders and limit shot attempts. Coach Lehman gave the game ball to team co-captain junior LSM Kai Sanvictores for his outstanding efforts all over the field.

San Marcos is 5-0 in the Channel League, which Lehman said this year includes Thacher and Cate — although that is not reflected on LaxPower.com. Lehman said the athletics directors from the five schools agreed in the offseason to expand the Channel League from three teams — San Marcos, Santa Barbara and Dos Pueblos — to five, adding former independents Thacher and Cate. The teams’ schedules this year reflect home and away games against each of the four other Channel teams.

With that league record and the 10-1 overall mark, San Marcos is pushing its way up the rankings and is make a statement to get into the regional playoffs, which will be determined and announced after a meeting of the coaches committee from the Greater Los Angeles chapter of US Lacrosse on April 30.