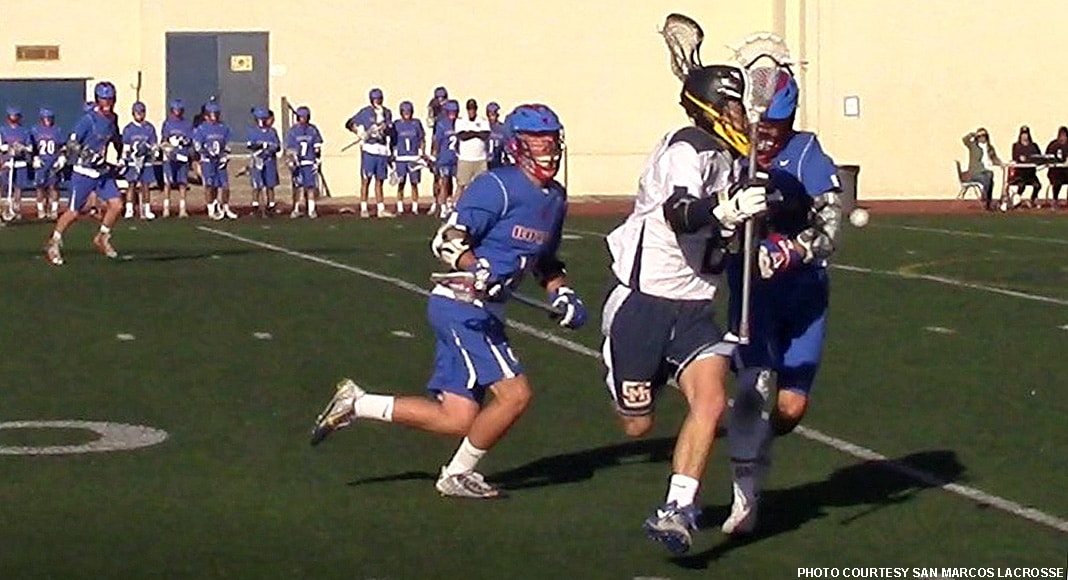 Visiting San Marcos tightened up its defense in the second half Thursday, limiting No. 17 Santa Monica to one goal while mounting a comeback to post a 10-7 victory.

The Royals (2-1) opened the season at No. 18 in the US Lacrosse/MaxLaxLA coaches poll but dropped out after a 12-6 home loss to now-No. 4 Oaks Christian. They followed that with a win at Royal, but slipped out of the Top 20 nonetheless.

Thursday, they made a bid to jump back in.

Trailing 6-5 at halftime, head coach Rick Lehman said his team came out fired up in the third period and rattled off three consecutive goals to take the lead. The San Marcos defense, meanwhile, locked things down, including excellent goaltending from junior Ryan Lehman, and allowed only one second-half goal.

Last year, San Marcos finished the regular season 12-2 but didn’t receive a bid to the US Lacrosse North championship tournament. Instead, the Royals were seeded No. 2 in the US Lacrosse Postseason Invitational and went on to win twice and reach the title game before falling to Mira Costa.

This year, San Marcos strengthened its nonconference schedule. Saturday, the Royals face another big challenge with a visit from No. 8 Oak Park (1 p.m.).

Santa Monica, which finished 14-3 last season and opened at No. 14 in the preseason coaches poll, dropped to 1-4 in the early going of this season, including two one-goal losses. The Vikings open Ocean League play next week with homes games against Culver City on Wednesday and El Segundo on Friday.